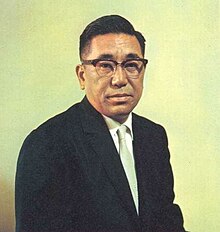 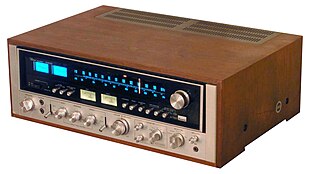 Sansui Electric Co., Ltd. (山水電気株式会社, Sansui Denki Kabushiki-gaisha) is a Japanese manufacturer of audio and video equipment. Headquartered in Tokyo, Japan, it was part of the Bermuda[clarification needed] conglomerate (from 2011).[3]

Founded in Tokyo in 1947 by Kosaku Kikuchi, who had worked for a radio parts distributor in Tokyo before and during World War II. Due to the poor quality of radio parts Mr. Kikuchi had to deal with, he decided to start his private radio part manufacturer facility in December 1944 in Yoyogi, Tokyo. He picked transformers as his initial product line. Kikuchi's thought was "Even with higher prices, let's make the higher quality of products."[4]

In 1954 manufacturing Pre-Amp, Main-Amp kits, as well as finished amplifiers which used tubes, was started; 1958 Sansui introduced the first stereo tube Pre- and Main amplifiers.[4] By the 1960s Sansui had developed a reputation for making serious audio components. They were sold in foreign markets through that and the next decade. Sansui's amplifiers and tuners from the 1960s and 1970s remain in demand by audio enthusiasts.[3] Since 1965 the iconic matte-black-faced AU-series amplifiers were released.[5][6] In 1967 Sansui produced its first record player.[7]

In 1971, Sansui introduced the Quadphonic Synthesizer QS-1, which could make simulated four-channel stereo from two-channel sources. Sansui developed the QS Regular Matrix system, which made it possible to transmit four-channel Quadraphonic sound from a standard LP. The channel separation was only 3 dB, but because of the human way of hearing it sounded relatively good. In 1973, Sansui introduced the more advanced QS Vario Matrix decoder with 20 dB separation. Unfortunately, the SQ system developed by Columbia/CBS was the most popular matrix system. But later QS decoders could also play SQ records. Some Sansui receivers could also play the most advanced four-channel system – CD-4 (or Quadradisc) by Japanese JVC and American RCA. Most big record companies used either SQ or CD-4, but Decca used the Sansui QS system. For completeness, it should be mentioned that the 2-channel-range was extended by tape machines and cassette decks, too.[8]

In the UK around 1982, the Sansui AU-D101 amplifier and its more powerful sibling the AU-D33,[11] were acclaimed by audiophiles[12] and were so well matched[citation needed] to a pair of KEF Coda III speakers that they could be bought as a set from some outlets.[3] These amplifiers used a complex feed-forward servo system which resulted in very low 2nd order harmonic distortion. Despite this success, Sansui failed to follow up with further mass-market audiophile components.[3]

As the mid-1980s arrived, sales were lost to competitors (Sony, Pioneer, Matsushita's Technics).[3] Sansui began to lose visibility in the United States around 1988, and then focused on manufacturing high-end components in Japan. The company began to manufacture high-end television sets and other video equipment, but ceased exportation. In the late 1990s, the company's brand was used on video equipment manufactured by other companies. The current manufacturer of the rebranded sets is Orion Electric, based in Osaka and Fukui, Japan. Its U.S. subsidiary markets products under the Sansui brand, among others. Sansui is thus a mere umbrella brand at present.[3] This radical change in Sansui's corporate identity has resulted in a notable change in its product quality as consumers now tend to consider Sansui a mass-market brand rather than a maker of high-end electronics.[13]

Sansui had developed the patented a-x balanced circuit,[14] that used in its high power amplifier along with the so-called double diamond differential, another patent for balanced driver stage. These years Sansui developed a record player, P-L95R, with a handling similar to CD-players; it allowed to play both sides of the record without turning it.[15]

Many Sansui devices, particularly vintage items, have a large following in the audio community to date, with online forums[24] dedicated to the Sansui brand.