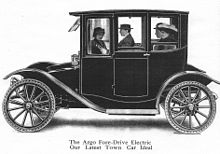 The Argo Electric Vehicle Company was an electric automobile manufacturer that operated in Saginaw, Michigan, United States, from 1912 to 1916. The Argo Electric used a 60 volt system with Westinghouse motors. They claimed to be capable of 20 mph (32 km/h). It had 6 forward and 6 reverse speeds, had 36 x 4 cushion tires and used an 18-inch (457 mm) steering wheel on the left. They were offered in both four- and five-passenger models, with open and closed versions available, and all models used steering wheels. The 110-inch (2,794 mm) wheelbase was the longest of any electric at the time. The Argo Brougham was a 4-passenger car, weighing 3,200 lb (1,451 kg), claimed a range of 75 miles (121 km) per charge using thirty 190 ah, MV Exide batteries.

By 1914 Argo joined with the and vehicle companies to form the American Electric Car Company. Three different models were marketed.[1] In 1916 the Columbia Motors Company purchased the assets of Argo.