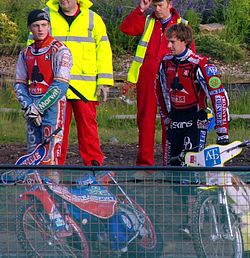 Darcy Ward, as a guest, and James Wright

The Belle Vue Aces are a British speedway team from Manchester in the north west of England.

Racing first took place in 1928 at the Belle Vue greyhound stadium in Kirkmanshulme Lane before moving the following year to a specially built stadium nearby on Hyde Road. The club raced there until 1987 when the stadium was demolished. The club moved to a new track at its original home and remained there before moving to the National Speedway Stadium in 2016.[1]

Teams no longer participating in the league are not included on the graph. When a team's figure rises from zero, that indicates having moved up to the Premiership after the previous season

Hyde Road had a 40,000 capacity with a track length of 382 metres (418 yards), and was built around an existing athletics and cycling track. It is alleged that Britain’s first open grass-track event took place here on 25 February 1928. Later, with the grass gone, it was claimed to be the first purpose built speedway track in Britain. The opening speedway meeting here was staged on 23 March 1929, when Arthur Franklyn won the Golden Helmet.

Belle Vue again had two teams in 1934, one in the National League and the other, known as the Goats, in the reserve league. Liverpool transferred their provincial league operation to Belle Vue in 1937, so again, Belle Vue had a team in both leagues.

Belle Vue was the only track to continue operating throughout the Second World War,[9] running a total of 176 meetings during the war years, which were attended by a total of 2,816,000 people. The winners of the wartime British Individual Championships were:

After the war, team racing resumed, with the Aces taking their place in the 1946 National League, and subsequently Division One the following year. There was sadness on 13 September 1947 however, when manager E.O. Spence died. Johnnie Hoskins took over from Alice Hart as promoter in 1953.

With so few tracks running, the Aces found themselves in the 11 team National League in 1957. A change in promoter occurred in 1960 with Ken Sharples taking charge. Harold Jackson took over as Speedway Manager in 1964, prior to the Aces becoming founder members of the British League in 1965. Dent Oliver became Speedway Manager in 1967, and remained in that position until 1973.

Frank Varey took over as Speedway Manager in 1974, before Jack Fearnley took up the reins in 1974. In 1982, former World Stock-Car Champion Stuart Bamforth became promoter. The stadium was also used for Stock Car racing right up to its closure in 1987.

Following the announcement that Bamforth had sold the stadium for redevelopment, the last speedway meeting was staged on 1 November 1987, when a double header took place. Firstly, Belle Vue defeated the Coventry Bees in a replay of the League Cup before losing to the Cradley Heath Heathens in the final league match ever raced at Hyde Road.

The greyhound track at Belle Vue Stadium (Kirkmanshulme Lane) was the first to open in Britain when, on 24 July 1926, some 1,700 enthusiasts witnessed a dog called Mistley win the very first race. A grass-track meeting took place here on 5 May 1928, with Syd Jackson emerging as the winner. The dirt track was stated to be similar in size and shape to Wimbledon and Harringay, with the first meeting going ahead on 28 July 1928, when Frank Arthur won the Golden Helmet.

When the stadium at Hyde Road was sold in 1987, the Aces moved back to the Greyhound Stadium, under the promotion of Peter Collins, John Perrin and Don Bowes. The opening meeting of the new era of the Aces was held on 1 April 1988, and saw Belle Vue take on Bradford Dukes in the Frank Varey Northern Trophy. However, the match was abandoned after just two heats due to a waterlogged track (rain), with the Aces leading the match.

Due to other commitments Collins resigned from his promotional position in 1989, leaving Perrin and Bowes in charge of the Aces. With the amalgamation of the two leagues, Belle Vue became members of the British League Division One in 1991.

A further management change in 1994 saw George Carswell link with Perrin and Bowes as co-promoter. Both divisions of the British League joined together to form a 21 team Premier League in 1995, with the Aces becoming founder members.

A further promoting change in 1995 saw John Hall replace Don Bowes, to link up with Perrin and Carswell. The Premier League broke in two at the end of 1996, with the Aces becoming members of the new Elite League, where they have remain up until the present day.

Belle Vue rode at Kirkmanshulme Lane until the end of the 2015 season before moving to the newly built National Speedway Stadium in 2016.

The Aces moved to a new purpose-built stadium in Gorton in 2016, which also serves as the national stadium for British speedway.[12] Following early teething troubles with the track surface which led to meetings being postponed, the Belle Vue team had a successful season and finished the league programme at the top. However, following matches with Lakeside Hammers (won) the Aces lost to Wolverhampton Wolves in the two-leg Play-off finals.

The track has since become widely regarded as the best in the UK. It has hosted the British Final since 2016 and a number of international meetings. In 2020 the stadium will host the finals of the Speedway of Nations on 8 and 9 May.[13]