Gregory Murphy (born 23 August 1972) is a New Zealand professional racing driver, best known as a four-time winner of the Bathurst 1000.[1] Greg Murphy joined Jeremy Clarkson and James May presenting Top Gear Live, when it had its first international Live show at ASB Showgrounds in Auckland from 12–15 February 2009, and again when the show returned in 2010.

Murphy became involved in motorsports by the age of eight, progressing through karts to saloon cars and single-seaters before moving to Australia. He first competed at the Bathurst circuit in 1994. The following two years he drove for Brad Jones Racing in the Australian Super Touring Championship and the Holden Racing Team (HRT) in endurance events, winning the Bathurst 1000 with Craig Lowndes in 1996. He drove for the HRT full-time in the 1997 Australian Touring Car Championship and placed fourth. Due to Craig Lowndes' return from overseas, Murphy only drove for the team in the endurance races in 1998.

He is one of the best known V8 Supercar drivers (car No. 51 since 2001) and has won four rounds at his home circuit at Pukekohe, near Auckland (2001, 2002, 2003 and 2005). At the Mount Panorama Circuit at Bathurst, Murphy has the third best record for a Kiwi with four wins, compared to Jim Richards' seven, and his son Steven Richards' five.

Murphy's 2003 pole position of 2:06.8594 at Bathurst stood as the fastest lap ever recorded at Mount Panorama Circuit until eclipsed seven years later. It is known colloquially as "The Lap of the Gods" and widely regarded as one of the finest moments in Bathurst folklore.[2][3]

In November of 2003, Murphy won the Bathurst 24 Hour race in the Garry Rogers Motorsport built, 7.0 litre V8 Holden Monaro 427C alongside Peter Brock, Jason Bright and Todd Kelly.[4] Murphy qualified the #05 Monaro in second place behind the 2002 race winning Monaro of teammate Garth Tander. The two Monaro's led the race throughout with Murphy in the car finishing only 0.3505 in front of Tander after 527 laps of racing.[5]

During 2005 and 2006 Murph competed for Paul Weel Racing (PWR) where he initially had good results until changing to the Perkins engines. Since then Murphy has never really had any outstanding performances. Murphy joined Tasman Motorsport in 2007 where his lack of results continued.[6]

Murphy joined Paul Morris Motorsport in 2010 to drive Castrol supported Commodore.[7] While the partnership looked like it was to reignite the "old murph" his performances and a poor car failed to produce results thus the announcement came in November 2010 that the partnership would split.

Murphy joined Kelly Racing for 2011 in a late deal with major sponsor Pepsi Max. Throughout the year the Pepsi Max Crew car has undergone four different paint schemes all with a graffiti theme. Murphy has had varying success throughout the year and as he has become more comfortable with his car and the team he has had some good performances, including pole position at the Bathurst 1000.[8]

2013 saw Murphy return to Holden Racing Team on a part-time basis, co-driving with Car #22 driver James Courtney in the endurance events. However, Bathurst saw Murphy involved in a heavy crash at Reid Park, therefore ending his chances of finishing the race. The bad luck didn't end there, with yet another serious incident bringing Car #22 down (this time involving Paul Dumbrell from Triple Eight Race Engineering) in Race 1 at Gold Coast.

Erebus Motorsport announced a wildcard entry for the 2021 Bathurst 1000, driven by Richie Stanaway and Greg Murphy backed and supported by Boost Mobile. 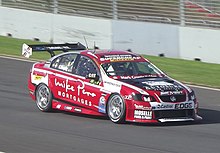 Greg was born and raised in New Zealand, where he attended Havelock North High School. After being based in Melbourne, Victoria for most of his racing career he now lives in New Zealand with frequent trips to Australia.

In 2011 it was released that in New Zealand they were making a new touring car series, Murphy was instantly interested and after talks with Paul Manuell they decided to make M3 Racing which Richard Moore, Paul Manuell and Greg Murphy would drive their three cars. As soon as Murphy confirmed he would be racing in the 2012 season, New Zealand Businessman Mike Pero signed up to be his major sponsor for the season.

In the 2012 season Murphy had a successful year claiming a pole, 5 race wins and 2 round wins and also the Endurance Championship but because he had to miss two rounds because of back problems he missed out on the overall championship but managed to finish 2nd overall.

The 2013 season Murphy redeemed himself after missing out on the title due to back problems, Murphy managed to win 6 races and finished on the podium 14 times out of 21 races, and after a thrilling final race battle with Ant Pedersen, Murphy won his first SuperTourer title.