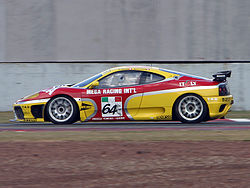 A Ferrari 360 Modena shared by Charles Kwan and Matthew Marsh in the 2004 FIA GT Championship.

The Group N-GT (also known as Series Grand Touring Cars) was a motor racing category launched by the Fédération Internationale de l'Automobile in 2000. The first cars were homologated on 1 March, 2000 by Porsche and Ferrari. A total of eight different models from six marques were homologated throughout the class existence.

Appendix J article 257 of the International Sporting Code states the Series Grand Touring Car definition as follows: "An open or closed automobile which has no more than one door on each side and a minimum of two seats situated one on each side of the longitudinal centre line of the car; these two seats must be crossed by the same transversal plane. This car must be adapted for racing on circuits or closed courses." The engine must be fitted with a production based engine with a capacity of up to 8.0L. The restrictor size was determined based on the cylinder capacity and the weight of the car.[1]