Henry Leslie Firth (18 April 1918 – 27 April 2014) was an Australian racing driver and team manager. Firth was a leading race and rally driver during the 1950s and 1960s and continued as an influential team manager with first the Ford works team and then the famed Holden Dealer Team (HDT) well into the 1970s. Firth’s nickname was "the fox", implying his use of cunning ploys as a team manager.[1]

Firth won the Bathurst 500, including its predecessor at Phillip Island, four times (twice in the final two races held at the Island and twice at Bathurst). He also won the Southern Cross Rally and the Australian Rally Championship. He was inducted into the V8 Supercars Hall of Fame in 2007.

Firth has often been described as a 'bush engineer', someone who could probably build a race winning engine from nothing more than a roll of wire, while leading Australian Motoring journalist and former part-time racer Bill Tuckey once wrote of Firth that as a driver, engineer and team manager, he was "As cunning as an outhouse rat".

Firth was born in Orbost, Victoria. After returning from service in World War II, Firth turned his attention to motorsport. He was involved in preparing the winning BMW 328 for the 1948 Australian Grand Prix (driven by Frank Pratt). In the 1950s Firth successfully competed in Porsche 356’s in races and hillclimbs. Firth had a great record in the Alpine Rally winning the event five times between 1953 and 1962. Firth then teamed with Bob Jane in a Mercedes-Benz 220SE to win the 1961 Armstrong 500 at Philip Island. 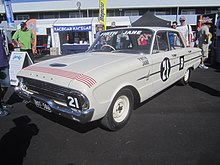 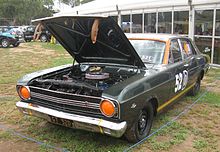 In 1962 the Firth Motors workshop at Queens Avenue, Auburn (Melbourne) became the base for the Ford works team. Firth and Jane drove a Ford Works Team Ford Falcon XL to victory in the 1962 Armstrong 500 at Philip Island. Firth and Jane recorded the races first hat-trick of wins when they won the 1963 Armstrong 500 driving a Mk.I Ford Cortina GT at Bathurst (the race had moved to Bathurst that year due to the poor state of the Phillip Island Circuit following the 1962 race). In 1964 Firth and Hoinville won the Ampol Round Australia Trial in a Cortina GT. Firth also won the 1964 Lowood 4 Hour with John Raeburn in a Ford Cortina GT.[2]

Firth and John Reaburn finished 3rd in the 1964 Armstrong 500 in a Cortina GT, while Bob Jane won his 4th in a row, teaming with George Reynolds, also in a GT. Firth and Reaburn also teamed in the 1965 Armstrong 500, but while the winning Ford Works car of Barry Seton and Midge Bosworth was the Harry Firth developed Ford Cortina GT500, Firth and Reaburn finished only 14th outright but won Class A for cars priced under £920 in a Mk.I Ford Cortina 220.

As part of his work with Ford Australia, Firth was recommended as a driver by a young Canadian born Aussie racing in the new Trans-Am series in the United States named Allan Moffat, and he traveled to the US and co-drove with Moffat in an Under-2 litre class Lotus Cortina in two races, a six-hour race at the Green Valley Raceway in Smithfield, Texas, and a four-hour race at Riverside in California. Following the Riverside race, the American's reportedly wanted Firth to stay and help the team but Firth refused, stating that he had to be back in Australia for a rally. Harry Firth won the rally in question, the inaugural Southern Cross Rally, with navigator Graham Hoinville, driving a Ford Cortina GT.

The Ford works team didn't enter any cars for the 1966 Gallaher 500 at Bathurst and Firth teamed with Ern Abbott in a Morris Cooper S to finish in 6th place. The first nine finishers in the race all drove the famed Cooper S.

1967 saw Firth notch up his last victory as a driver in the annual 500 mile race at Bathurst, winning the 1967 Gallaher 500 with a young Fred Gibson in a Ford XR Falcon GT, the first Australian made Ford Falcon to use a V8 engine. Sydney based racer/designer Frank Matich was scheduled to co-drive with Firth but had to withdraw due to other commitments. Firth wouldn't have minded so much on missing out on the driving talents of Frank Matich as he was always of the belief that drivers used to being able to drive their specially built race cars hard weren't well suited to Series Production racing where you had to be much easier on what was really a road going car. Matich then recommended Gibson (who had finished 2nd in the 1966 race in a Cooper S) for the drive, with Firth meeting Gibson for the first time at a Bathurst hotel on the Friday before the race. Firth and Gibson were actually flagged in 2nd behind their Ford works team mates, Ian and Leo Geoghegan but following a re-count of the lap charts (after Firth protested the result resulting in long term animosity between himself and the Geoghegan's), were correctly awarded 1st place later that night.[3]

Firth won the 1968 Australian Rally Championship driving a Ford Cortina Lotus.[4] That year he also led a three car Ford Australia assault on the inaugural London–Sydney Marathon, preparing a trio of XT Falcon GT's for the event which started on 24–25 November at Crystal Palace in London and traveled through Europe, the Middle East and South Asia before arriving in Bombay, India on 1–2 December. From there, the teams and their cars had an eight-day boat trip to Fremantle, Western Australia. The cars then traveled across the Nullarbor into South Australia before finally crossing into New South Wales and arriving at the Warwick Farm Raceway in Sydney on 18 December. The Ford Works Team cars, which included Firth in the driving line up, survived the tough conditions of the marathon rally and finished 3rd, 6th and 8th and claiming the Teams Prize.

This article is about the team started in 1969. For the 1968 team run by the Scuderia Veloce team, see Holden Dealer Racing Team.

In 1969, Firth was considered by those at Ford to be 'too old' and was replaced as Ford Works Team boss by Al Turner, an American more known in Drag racing than circuit racing. Within a short time he had crossed over to General Motors Holden (GMH) to become manager of the new Holden Dealer Team, which despite the "Dealer" name (and Harry's claims on the ABC's Four Corners program in 1970 that as team boss he worked for a so-called "Dealer's Council")[5] was actually a full works team backed by Holden and set up by GMH executive John Bagshaw. Because of General Motors worldwide factory ban on motorsport at the time (dating back to the 1955 24 Hours of Le Mans disaster that killed 80 people), the team's cash flow from Holden had to come through the 'back door' to avoid alerting GM headquarters in Detroit. Ironically, the HDT operated out of Firth’s Auburn workshop, the same that had once housed the Ford works team.

That year (1969) Firth was instrumental in launching the professional careers of two soon to be famous drivers – talented up and coming rally driver Colin Bond and young tearaway Peter Brock whose feats in an Austin A30 had brought him to Firth’s attention. Bond and Tony Roberts won the 1969 Hardie-Ferodo 500 for the HDT in a Holden Monaro GTS350, with Des West and Brock finishing third in a similar car.

Over the next eight years the Holden Dealer Team under Firth achieved many notable race and rally victories and championship wins. Included among these are:

At the end of 1977, Firth retired as manager of the Holden team but continued his involvement in motor racing as National Chief Scrutineer between 1978-1981.