Statesman is an automotive marque created in 1971 by Holden and sold in Australasia.[1] Statesman vehicles were sold through Holden dealerships, and were initially based on the mainstream Holden HQ station wagon platform, thereby providing more interior room and generally more luxurious features than their Holden sedan siblings. Production ceased with the last of the WB series cars in 1984. 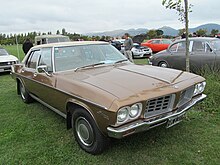 The original Statesman HQ long-wheelbase sedans were released on 22 July 1971 as a replacement for the HG series Holden Brougham, although drawings exist of an HQ Brougham, albeit in short-wheelbase guise.[2] The first Statesmans were based on these short-wheelbase Holden HQ variants. Statesman was initially offered in two specifications, an upmarket Statesman de Ville and a basic Statesman Custom. Engines ranged from a 202-cubic-inch (3.3 L) Red six-cylinder, a 253-cubic-inch (4.1 L) the metric designation given to the 253 was always the 4.2 V8, a 308-cubic-inch (5.0 L) V8 and a 350-cubic-inch (5.7 L) Chevrolet small-block V8, but the de Ville featured the 308 engine as standard equipment. Compared to the short-wheelbase Holden HQ models, the Statesman featured a wheelbase extended by 3 inches (76 mm), totalling 114 inches (2,900 mm), in common with the HQ range of Holden station wagons. The extra length was incorporated behind the rear doors to allow for additional rear seat legroom.

The Statesman was intended as a rival for Ford Australia's successful Fairlane[3] which had debuted in Australian-designed form as the ZA series in March 1967.[4] The Fairlane had created a new and exclusive category of Australian-made prestige cars. It was derived from the Falcon, with an extended wheelbase and unique front-end and rear-end styling to differentiate the car's appearance. At the time, this category of vehicle proved to be very profitable, in that the sale price was significantly higher than the base car from which the prestige model was derived, and the additional costs of production were only moderate. GM-H went to some length to set the new luxury Statesman marque apart from the Holden equivalent in their sales literature.[5] for the new models, totally avoiding the presence of the name "Holden", even to the extent of using the term "General Motors" in lieu of "General Motors-Holden's". Advertisements in newspapers among other media followed the same format.[6]

General Motors New Zealand assembled the HQ Statesman until 1975, launching it a few months after Belmont and Kingswood assembly began at the Trentham plant, near Upper Hutt in September 1971. Initial build was a single model with 308V8, column shift Trimatic, white headliner, black vinyl roof and electric windows. The only factory options were metallic paint and vinyl roof delete. Only a bench front seat was available and brocade trim options included white, unique to the Statesman. New exterior and interior colours, plus colour matched headliners, were introduced in mid-1973 and, a few months later, separate front seats and T-bar floor shift became a factory option though initially the floor console was black, not colour matched to the rest of the interior. Australian assembled Chevrolet 350s supplemented the locally built cars albeit in low volume. These always had colour matched interiors and had minor styling differences such as the grille, badging and no decorative inserts in the rear bumper. They shared the grille but were not the same model as the South African built Chevrolet de Ville.

Statesman HQ models were marketed in South Africa as the Chevrolet Constantia and the Chevrolet de Ville[7][8] The Constantia was fitted with a locally assembled five-litre V8 or 4.1-litre inline-six and was considered locally built. The Chevrolet de Ville, however, used an imported 5.7-litre V8 as fitted to the Corvette and was priced 33 percent higher than a comparable Constantia V8.[9] The de Ville received praise for being considerably more nimble, lighter, more compact and better handling than the American models it replaced without any loss in accommodation.[9] Power for the 350 V8 was claimed at 205.2 and 174.2 kW (279.0 and 236.8 PS; 275.2 and 233.6 hp), SAE and net figures respectively.[10]

General Motors–Holden's updated the range in 1974 to create the Statesman HJ, retaining the Statesman de Ville whilst creating a new flagship in the Statesman Caprice, replete with standard luxury features such as air-conditioning and leather seating. Statesman Custom was discontinued with the HJ series and engine availability was restricted to the 308-cubic-inch (5.0 L) V8 engine. Statesman Caprice was the most luxurious car offered by General Motors in Australia at that point, with air conditioning, leather seats, electric locking, power windows, and no fewer than 13 interior lamps all featuring on the standard equipment list.

Once again, the Caprice was General Motors−Holden's response to a new Ford car. In 1973, Ford upped the ante in the Australian prestige car stakes when they unveiled the LTD. This was a Fairlane which had the wheelbase extended again – to 121 inches (3,100 mm) – making it the only Australian car which fitted into the US full-size category. The LTD was a significant success for Ford, both in terms of sales and profits, as well as making a statement regarding their prowess as a manufacturer.

From March 1976, late in the HJ series, an electromechanical rear drum anti-lock braking system (ABS) was made available on the Caprice. This system, a Delco-Moraine unit, carried over to the subsequent Statesman HX models, but after the introduction of rear disc brakes on the Statesman HZ series, ABS was not seen on another Statesman or Holden model until the Holden Calibra coupe and Holden VQ Caprice in 1991. This new ABS system was the electronic Bosch patent system operating on all four-wheel discs.

The Statesman HX de Ville and Caprice models were released in July 1976.[14] A more formal grille was adopted and emissions' regulations saw a retuned 5.0-litre V8.

In 1977, General Motors-Holden's introduced the Statesman HZ, which involved a minor cosmetic facelift. However, it had a significant engineering upgrade, along with the rest of the GMH range, involving the adoption of Radial Tuned Suspension, giving the Statesman better handling. 4-wheel disc brakes were now fitted to all Statesman models.

The previous Director of GMH Engineering, George Roberts had insisted that the Statesman have a high standard of ride comfort (at the expense of ultimate roadholding). (Roberts previously had been the Chief Engineer of the GM Cadillac Division). Prior to HZ, the Statesman's Cadillac style of ride was not to everyone's taste.

The Statesman de Ville and Caprice were supplemented in 1979 by an intermediate model – the SL/E, which was launched with a different "eggcrate" grille.

The final series to be marketed under the Statesman marque was the Statesman WB. Released in May 1980,[15] the WB series was offered in Statesman De Ville and Statesman Caprice models.[15] As with previous Statesmans, GMH did not use the Holden name in the badging or the official sales literature.[16] The WB had a six-light body, with a longer, squared-off roofline. The design was by GMH's Chief Stylist, Leo Pruneau. The styling of the WB Statesman was a compromise between achieving a fresh appearance and minimising the cost of redesign, by using panels from the ancient HZ model. Production comprised 5,450 De Villes and 3,055 Caprices.[17]

WB Series II models were released in September 1983 with fundamentally cosmetic changes, except for the introduction of a front bench seat (six-passenger) option for De Ville buyers.[18] In late 1984 General Motors-Holden's announced that it intended to vacate the big-car market to concentrate on production of luxury versions of the Holden Commodore.[18] Series II production comprised 4,269 De Villes and 1,153 Caprices.[17]

In addition to the Statesman WB, a range of Holden WB passenger vehicles were prototyped along the lines of pre-existing HZ series vehicles, but only the commercial models (ute, panel van and cab-chassis "One Tonner") actually went into production from 1980 through 1984.