The Dunlop Super2 Series (formerly known as Dunlop Series) is an Australian touring car racing competition, specifically the second tier series for Supercars competitors. Competing vehicles are older than those utilised in the Supercars Championship series and are usually run by smaller teams with lower budgets. Approximately half the teams are for 'gentleman racers', while some team owners will put a young emerging driver into the car and team they own. The series runs half the number of events that the Supercars Championship runs.

The series was first held in 2000 as the 2000 Konica V8 Lites Series and this inaugural contest was won by Dean Canto. Towards the end of the season Stone Brothers Racing entered a car for David Besnard as preparation for the long distance races, in the main V8 Supercar series, the Queensland 500 and the Bathurst 1000, which unlike the other races require two drivers for each competing vehicle. Since then main series teams have used the series to help get their endurance co-drivers up-to-speed, or have employed drivers competing for other Fujitsu Series teams. While originally Fujitsu Series teams were allowed to enter main series events, this has since been discontinued as all main series events are limited to those teams carrying valid franchise slots for the main series, although in limited circumstances Fujitsu series teams have been able to lease entries from main series teams.

The 2007 champion, Tony D'Alberto, drove for the Tony D'Alberto Racing team, and like many of his predecessors, graduated to the V8 Supercar series in 2008, again with the family team.

From 2009 onward all Super2 Series have run on the Supercars calendar.

The Holden VZ Commodore of Marcus Zukanovic at the Adelaide Parklands Circuit for the opening round of the 2010 Dunlop Super2 Series (Back then as the 2010 Fujitsu V8 Supercar Series). 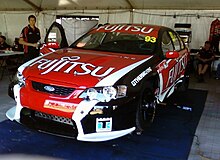 The Ford BF Falcon of John McIntyre at the Adelaide Parklands Circuit for the opening round of the 2010 Dunlop Super2 Series (Back then as the 2010 Fujitsu V8 Supercar Series).