The Swindon Speedway team, also known as the Swindon Robins, are an English motorcycle speedway team established in 1949 that competes in the SGB Premiership, the top division of speedway league competition in the United Kingdom. They were league champions in the 2017 and 2019 seasons.[1]

The club have raced on their home track at the Abbey Stadium, Lady Lane, Blunsdon since their inception. 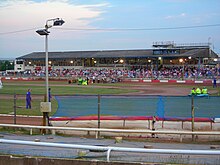 The Abbey Stadium, the home of Swindon Robins

The formation of the club followed the sport's prehistory in the town at the now-demolished Gorse Hill Aerodrome, where dirt track racing had taken place since 1928.[2]

The birth of the Robins was a product of the partnership of Bristol speedway manager Reg Witcomb and businessman Bert Hearse. Under their direction, a 410-yard (370 m) cinder track was built.[3]

The first meeting, a non-league home challenge match, took place on 23 July 1949 against future rivals Oxford, and an official attendance figure of 8,000 was given, although employees of the club believe that 10,000 would be closer to the truth. The Robins lost their debut meeting 39–45 in a meeting that saw top score for the home side with 11 points on his wedding day. In the process he won the first-ever race, was beaten by an opponent only once, and set the first-ever track record at 82.8 seconds.

Teams no longer participating in the league are not included on the graph. When a team's figure rises from zero, that indicates having moved up to the Premiership after the previous season

Following difficult campaigns in 2010 and 2011, Swindon signed Denmark's Peter Kildemand, former world #5 Hans Andersen and Australian international Troy Batchelor, who rode for the Robins in 2008 and part of the 2009 season. Alun Rossiter also returned as team manager after a 2-year spell with Coventry, with whom he won the Elite League in 2010. In 2012, the Robins won the Elite League title after beating the Poole Pirates 95–89 on aggregate following a 45-year wait for glory.

In 2013, 2014 and 2015, the Robins made the semi-finals of the playoffs, but failed to advance further. At the start of the 2015 season, Swindon Robins No 1 Adrian Miedziński was injured in the first meeting at the Abbey vs Poole Pirates, with Peter Kildemand filling in on a temporary basis before the club signed Australian international Darcy Ward. However, Ward suffered a career-ending accident while riding in Poland, and Kildemand once again stepped in to complete the season.

The 2016 Swindon Robins team was nicknamed Roscos Roo's, because it contained five Australians in addition to the required two British reserves. In 2017, the Robins won the League Championship against Wolverhampton Wolves despite losing the first leg at their home track.