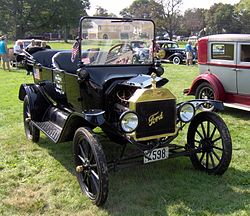 An antique car is an automobile that is an antique. Narrower definitions vary based on how old a car must be to qualify. The Antique Automobile Club of America defines an antique car as over 50 years of age.[1] However, the legal definitions for the purpose of antique vehicle registration vary widely. The antique car era includes the Veteran era, the Brass era, and the Vintage era, which range from the beginning of the automobile up to the 1930s. Later cars are often described as classic cars. In original or originally restored condition antiques are very valuable and are usually either protected and stored or exhibited in car shows but are very rarely driven.

Main article: History of the automobile

The Veteran car era, Brass car era, and the Vintage car era, are part of the Antique car classification as all automobiles produced prior to World War I are considered to be antiques.

On Christmas Eve in 1801 Richard Trevithick of England demonstrated a steam-powered carriage, the Puffing Devil, that is considered the first horseless carriage, but Nicolas-Joseph Cugnot has the claim of the first steam-powered vehicle with the Fardier à vapeur in 1770. The first production of automobiles was by Karl Benz in 1888 in Germany and, under licence from Benz, in France by Emile Roger.

The time line is not exact but Thomas Davenport as well as Robert Anderson (of Scotland) built a battery electric car between 1832 and 1839.[2]

The era of automobiles began in the U.S. when George Selden of Rochester, NY filed a patent on May 8, 1879, but the patent was not approved until November 5, 1895. This was the first U.S. patent for an automobile. By the time a patent was approved many automobiles were in production. Charles Duryea built a three-wheeled, gasoline-powered vehicle in 1893, and his company built 13 cars of the same design in 1896. Gasoline automobiles were produced by Elwood Haynes in 1894, by Ransom Olds in 1895, Charles King and Henry Ford in 1896. Automobile races stirred the public interest and bicycle and buggy manufacturers began to convert to making automobiles.[3] 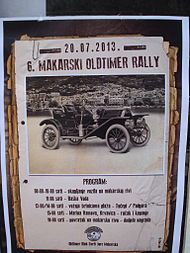 An antique car on a poster advertising a race in Makarska, Croatia

Racing began shortly after the production of the automobile. The first official auto race in the world was a 732-mile, round trip race, in the Paris–Bordeaux–Paris race. The first race in the U.S. was the six car, 54.36 mile race, from Chicago’s Jackson Park to Evanston, Illinois and back. Racing helped spur inventions that assisted in improvements to the automotive industry.[4]

The Veteran era began with the invention of the automobile and continued up to 1896.

The Brass Era is considered from 1890 to 1919.[5] Periods of the Brass Era are referred to as the Horseless carriage era.[6] The Horseless Carriage Club of America (HCCA) defines this era as "any pioneer gas, steam and electric motor vehicle built or manufactured prior to January 1, 1916".[7]

In the United Kingdom, the Brass era is split into two eras; the Veteran era and the Edwardian era.[10]

The Edwardian era includes cars produced between 1 January 1905 and 31 December 1918. This is considered pre-World War One cars in the United States.[10]

Antique cars are all cars made up to September 1939 which marked the beginning of World War II.[10]

Considered to be investments

See also: Most expensive cars sold in auction: Factors to the vehicle's value

Some consider such collectibles be a form of investment. Buying a particular antique car is then done primarily in view of profit in a future sale and not of enjoying a drive or taking pleasure in restoration work. The market for antique cars fluctuates wildly over the years. There have been periods, like the 1980s, which have seen strong and continued increase in price, but other periods (e.g. the early 1990s, and 2008–2009) which saw precipitous declines.