In European markets, the N52 began to be phased out following the release of the BMW N53 in 2007. However, in markets such as the United States, Canada, Australia and Malaysia, the N53 was deemed unsuitable due to the high levels of sulfur in the fuel.[5] From the year 2011, the N52 began to be replaced by the BMW N20 turbocharged four-cylinder engine until production of the N52 finished in 2015.[6]

Unlike its predecessors, there is no BMW M version of the N52. 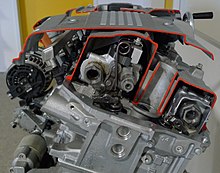 Rear of N52, with Valvetronic visible

Compared with its M54 predecessor, the N52 features Valvetronic (variable valve lift),[7] a lighter block due to the use of a magnesium alloy[8] and an electric water pump (replacing the belt-driven water pump)[9][10] and a variable output oil pump.[11] The redline was increased from 6,500 rpm to 7,000 rpm.[12]

The N52 engine block is made from a combination of magnesium and aluminium.[12] Magnesium is lighter than aluminium, however it has a greater risk of corrosion from water and may creep under load at high temperatures; this makes traditional magnesium alloys not suited for withstanding the high loads to which an engine block is exposed. Therefore, BMW used a magnesium alloy for the crankcase shell, with an aluminum 'inner block' to overcome the limitations of magnesium alloys.[11][15] The cylinder liners are made of Alusil[16] and a hollow camshaft is used to reduce weight.[11] 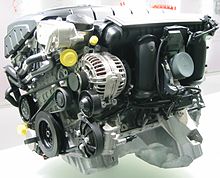 N52 shown from the intake side 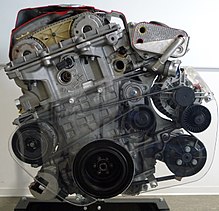 Front of the N52, with VANOS units visible 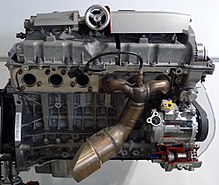 Exhaust side of the N52 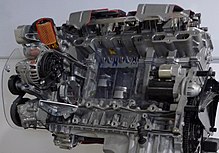 Cutaway view of the N52 intake side, showing the cylinders

The N51 engine is a SULEV version of the N52 that was sold in parts of the United States that had SULEV legislation.[25] Differences to the N52 versions include a variable-length intake manifold ("DISA") with three stages instead of one, and a compression ratio lowered from 10.7:1 to 10.0:1.[26]