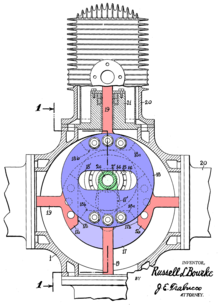 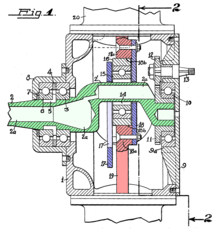 Animation of a four-cylinder bourke engine

The Bourke engine was an attempt by Russell Bourke, in the 1920s, to improve the two-stroke engine. Despite finishing his design and building several working engines, the onset of World War II, lack of test results,[1] and the poor health of his wife compounded to prevent his engine from ever coming successfully to market. The main claimed virtues of the design are that it has only two moving parts, is lightweight, has two power pulses per revolution, and does not need oil mixed into the fuel.

The Bourke engine is basically a two-stroke design, with one horizontally opposed piston assembly using two pistons that move in the same direction at the same time, so that their operations are 180 degrees out of phase. The pistons are connected to a Scotch Yoke mechanism in place of the more usual crankshaft mechanism, thus the piston acceleration is perfectly sinusoidal. This causes the pistons to spend more time at top dead center than conventional engines. The incoming charge is compressed in a chamber under the pistons, as in a conventional crankcase-charged two-stroke engine. The connecting-rod seal prevents the fuel from contaminating the bottom-end lubricating oil.

The operating cycle is very similar to that of a current production spark ignition two-stroke with crankcase compression, with two modifications:

The following design features have been identified:

Engineering critique of the Bourke engine

The Bourke Engine has some interesting features, but the extravagant claims[14] for its performance are unlikely to be borne out by real tests[citation needed]. Many of the claims are contradictory.[15]