The Cadillac Calais was the entry-level Cadillac model that was sold from 1965 to 1976. Cadillac renamed its low-priced Series 62 in 1965 as the "Calais", after the French port city of Calais that overlooks the narrowest point in the English Channel. In Greek mythology, Calais was one of two winged sons of Boreas, god of the North Wind, and Oreithyea. With the exception of no convertible model, the Calais shared the same styling and mechanics as the better-equipped, more expensive Cadillac de Ville.

In 1965, Calais tailfins were canted slightly downward, and sharp, distinct body lines were featured. The rear bumper was straight and the rear lamp clusters were vertical. The headlight pairs were vertical, permitting a wide grille. Side windows were curved and frameless. Perimeter frame construction allowed positioning of the engine forward in the frame, thus lowering the transmission hump and increasing interior room. The Calais was available as a 2- or 4-door hardtop as well as a "formal-roof" 4-door sedan, which was a hybrid with frameless, hardtop-like windows, but with a pillar between them.

The primary differences between the Calais and the De Ville were trim levels and standard equipment. While the De Ville was delivered with such amenities as power windows and 2-way power seats as standard equipment, hand-cranked windows and manual seat adjusters were standard on the Calais, with power windows a US$119 option ($977 in 2020 dollars [3]) in 1965.[4] At the same time, however, AM radio was a US$165 extra, as was air conditioning (More than 90% of Cadillac buyers ordered air conditioning), at US$495 ($4,065 in 2020 dollars [3]), on either.[5] Standard equipment included power brakes; power steering; automatic transmission; cornering lights; dual back-up lights; windshield washers and dual speed wipers; full wheel covers; remote controlled outside rear view mirror; visor vanity mirror; oil filter; five tubeless blackwall tires; heater; defroster; lamps for glove and rear passenger compartments and front and rear seat belts.[1]

Unlike the De Ville, the Calais did not offer leather seating areas and vinyl roof trim was not offered initially. A high-grade cloth and vinyl, similar to what was seen on top-line Buick Electras and Oldsmobile 98s, was standard. Another item not initially available on the Calais was the Cadillac-exclusive "firemist" paint, an extra-cost high gloss metallic paint. Both the high-end Buick and Oldsmobile models shared the GM C platform with Cadillac. Cadillac, always General Motors' technology leader, offered most De Ville options on the Calais, such as Twilight Sentinel and the GuideMatic headlight dimmer. In 1965, the new Turbo-Hydramatic, standard on the 1964 De Ville, but not the lower-priced Series 62, became standard throughout the Cadillac line, including the Calais. The 340 hp (254 kW) 429 cu in (7.0 l) V8 also remained the standard engine.[5] 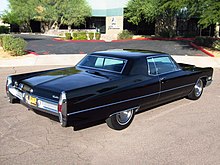 The Calais was extensively restyled for 1967. Prominent styling features were given a powerful frontal appearance with "forward-leaning" front end, long sculptured body lines, and redefined rear fenders that had more than just a hint of tail fins in them. The full-width forward-thrust "eggcrate" grille was flanked by dual stacked headlights for the third consecutive year. The squarer cornered grille insert had blades that seemed to emphasize its vertical members and it appeared both above the bumper and through a horizontal slot cut into it. Rectangular parking lamps were built into the outer edges of the grille. Rear end styling revisions were highlighted by metal divided taillamps and a painted lower bumper section. For 1967, power windows became standard on the Calais line, although power seats were still optional even in the 1970s models. Coupes got a new roofline, inspired by the Florentine show car created for the 1964 New York World's Fair, that gave rear seat passengers added privacy. As on that show car, the quarter window glass retracted rearward into a sail panel. New standard Calais features included non-glare rear-view mirror, electric clock, Automatic Climate Controls, padded dashboard, Hazard Warning system, outboard seatbelt retractors and rear cigarette lighters in all styles. A slide-out fuse box and safety front seat back lock for two-door models were additional Cadillac advances for the 1967 model year. Technical improvements included a revised engine valve train, different carburetor, Mylar printed circuit instrument panel, re-tuned body mounts, and a new engine fan with clutch for quieter operation. An energy absorbing steering column became optional.[10] 1967 was the last model year for pillared sedans.

For 1968, grilles had an insert with finer mesh and step down outer section which held the rectangular parking lights slightly higher than before. Front and rear side marker lights were mandatory, beginning this year. Rear end styling was modestly altered with the deck lid having more of a rake. The hood was re-designed to accommodate recessed windshield wiper-washers, which now came with three speeds standard. Of 20 exterior paint color combinations, 14 were totally new. On the inside, enriched appointments included molded inner door panels with illuminated reflectors and a selection of 147 upholstery combinations, 76 in cloth, 67 in leather and four in vinyl. New standard features included a Light Group, a Mirror Group, a trip odometer and an ignition key warning buzzer. Like all other Cadillacs, the Calais received the 472 cu in (7.7 l) OHV V8 in 1968. 1968 was also the last year for the "stacked" dual headlights, which were replaced with horizontal dual headlights in 1969. 1968 was also the last year for vent windows.

In 1969, the Calais was restyled. A new front fender treatment similar to the Eldorado helped to emphasize a stronger horizontal design line. Rear quarters were extended to give the car a longer look. Dual horizontal headlamps were positioned in the outboard step down areas of the all-new grille. The roofline was squarer and the rear deck and bumper more sculptured. A new ventilation system eliminated the need for vent windows, which provided a longer sleeker look and improved visibility. New standard features included front center seat armrests. Front seat headrests were now mandatory and the ignition switch was moved from the instrument panel to the steering column, which locked both the steering wheel and transmission selector lever when the key was removed.

In 1970, a facelift included a grille with 13 vertical blades set against a delicately cross-hatched rectangular opening. The bright metal headlamp surrounds were bordered with body color to give a more refined look. Narrow vertical taillamps were seen again and had smaller bottom lenses pointing downward in the bumper. Standard wheel covers and winged crest fender tip emblems were new. Exterior distinctions came from a Calais signature script above the rear end of the horizontal belt molding just ahead of the taillight dividers and from the use of small square back-up light lenses set into the lower bumper as opposed to the long rectangular lenses used on the De Ville. The traditional 'V' emblem beneath the Cadillac crest on the hood and decklid was removed from both the Calais and De Ville this year, not to return until 1972.

The Cadillac Calais was completely restyled, inside and out, for 1971. The new 1971 GM full-size bodies, at 64.3" front shoulder room (62.1" on Cadillac) and 63.4" rear shoulder room (64.0" on Cadillac) set a record for interior width that would not be matched by any car until the full-size GM rear-wheel drive models of the early to mid-1990s. Pairs of individually housed round headlamps were wider apart, with a winged Cadillac crest set between each pair. The V-shaped grille had an eggcrate style insert and was protected by massive vertical guards framing a rectangular license plate indentation. A wide hood with full-length windsplints, a prominent center crease and recessed windshield wipers was used. A larger Cadillac crest decorated the hood face and new optional fiber-optic lamp indicators were placed atop each front fender. A horizontal beltline molding ran from behind the front wheel housing, almost to the rear stopping where an elliptical bulge in the body came to a point and where thin rectangular side markers were placed above and below the chrome strip. The rear wheel openings were again covered by fender skirts. New vertical taillamps were no longer divided by a chrome bar. Long horizontal back-up lamps were set in the bumper, on either side of a deeply recessed license plate housing. The Calais wheelbase was extended to 130 in (3,302 mm). Interiors were redesigned featuring a new curved instrument panel available with brushed aluminum trim. Revised seating areas featured either standard cloth or optional vinyl upholstery.

In 1972, a minor facelift placed more emphasis on horizontal grille blades. The parking lamps were moved from the bumper to between the square bezeled headlamps, which were now set wider apart. After a two year absence, the traditional V emblems were restored to the hood and deck lid. New standard features included a bumper impact system, automatic parking brake release, passenger assist straps and flow through ventilation system.

New energy absorbing bumpers were seen on all GM cars in 1973. Styling refinements to the Calais included a wider grille with an intricate eggcrate design. Larger vertical rectangles housed the parking lamps between wide spaced headlamps which had square bezels but round lenses. Bumpers ran fully across the front and wrapped around each end. Vertical guards were spaced much further apart at a point outboard of the grille. The rear end had a bumper with a flatter upper section housing an angled license plate recess. Border outline moldings vertically "veed" paralleled the fender edge shape at the rear bodysides. Single horizontally mounted rectangular rear side marker lamps were placed over and under the rear tip of the thin beltline trim. 'Cadillac' script was seen on the front fender sides below the belt molding behind the wheel opening; 'Calais' script appeared on the lower right of the deck lid. Interior seating was revised this year, featuring standard cloth or optional vinyl upholstery. Also new were "soft-pillow" door panels with larger, sturdier pull-straps.

1974 also saw the introduction of the first airbag system, the optional "Air Cushion Restraint System". This option provided protection for front seat occupants in the case of a frontal collision. One airbag was located in the steering wheel hub, while the other sat in place of the glove compartment on the lower passenger side of the dashboard. The glove box was replaced with a rectangular storage compartment, complete with a lockable wood-tone hinged front panel, centrally located under the dashboard. Additionally, there was a driver's side knee bolster panel with an ashtray to the right of the steering column and a small hinged-door storage compartment on the left side. Although the "ACRS" system (also available on top of the line Buick and Oldsmobile models) saved lives, the option was quite expensive and therefore unpopular with customers. It was discontinued after 1976, and Cadillac would not offer airbags again until the 1990 model year.

1976 was the 11th and final year for the Cadillac Calais. Sales of the Calais had never been strong and had been declining steadily for years; the difference in cost between the entry-level Calais and the base De Ville had become basically negligible, and Cadillac customers saw little reason to purchase a Calais, when a better equipped De Ville cost only slightly more. For 1977, the Cadillac De Ville and Fleetwood would be extensively redesigned and downsized; prices would also increase significantly, leaving the lowly, slow-selling Calais unnecessary in the Cadillac lineup. The base Coupe De Ville became Cadillac's most affordable automobile for 1977.