Warning: call_user_func_array() expects parameter 1 to be a valid callback, cannot access private method Astra_Addon_Background_Updater::needs_db_update() in /home/content/73/11784573/html/prewarbeta/wp-content/plugins/wp-views/vendor/toolset/toolset-theme-settings/compatibility-modules/controllers/toolset-theme-integration-settings-front-end-controller.php on line 363
 Vehicle list – Eligible R – The Pre-war M.G. Register
Skip to content
This article is about the Cadillac Fleetwood 60 Special and Brougham. For the Fleetwood series by itself, see Cadillac Fleetwood. For the Brougham as its own model, see Cadillac Brougham.
Motor vehicle

Cadillac used the "Fleetwood" name as a prefix between 1934 and 1976 on several of its most expensive models, always designating an elevated level of luxury. Between 1958 and 1961, Cadillac used the "Brougham" sub-designation for its exclusive four-door Eldorado models.

Evolution of the Fleetwood designation 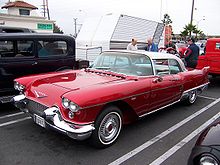 Lawrence P. Fisher was the Fisher brother most closely involved with Cadillac in its early years. In 1916, he joined the Fisher Body Company, which had been formed by two of his brothers in 1908. Larry (as people knew him) was one of four of the seven Fisher brothers who brought Fisher Body Corporation under the General Motors umbrella in 1919. In May 1925, Alfred P. Sloan, then the head of General Motors, appointed Fisher as Cadillac General Manager, an office he retained through 1934. Fisher immediately went to work adding exclusive, custom bodies to the Cadillac range. Thus he oversaw the purchase of the Fleetwood Metal Body Company by the Fisher Body Corporation in September 1925.[1]

Originally an enclosed carriage, drawn by a single horse, for 2–4 persons, “Brougham” owes its name to British statesman, Henry Brougham. Cadillac first used the name in 1916 to designate an enclosed 5-7 passenger sedan body style.[3] In the thirties, the name was given to a formal body style with open chauffeur compartment and enclosed rear quarters, metal roof and often "razor-edged" styling.[4] When Cadillac started offering Fleetwood bodies on some of its cars in 1925, the Brougham body style was Fleetwood bodied every year with the exception of 1926. After 1937 the Brougham name was not applied to any Cadillac for the remainder of the pre-WW II period.[2][3]

When the Sixty Special Series was retired in 1977, the Fleetwood Brougham took its place as Cadillac's largest owner-driven sedan model through 1986.[3][10]

In 1980, GM gave all of the full-sized B and C-body line new sheet metal to tidy up the styling and improve aerodynamics. The basic dashboard design was retained. Also new for 1980 was a two-door Fleetwood Brougham Coupe, which was based upon the Coupe de Ville but featured an exclusive formal landau vinyl roof. The 425 cu in (7.0 L) engine, a reduced bore 472, was further debored for 1980-81 to 368 cubic inches or 6.0 liters in order to comply with newly-enacted CAFE standards. For 1981, the 368 was provided with a modulated displacement system designed by Eaton Corporation, controlled by a digital computer, which locked off intake and exhaust valves to two or four of the eight cylinders, thus running effectively as a V6 or V4 under light load conditions where in third gear, and over 35 mph (56 km/h). This engine, called the "V8-6-4", was reliable, but the computer technology of the era was not refined enough for smooth operation and it was dropped from all models but limousines after 1981.

Both the 425 and 368 are small-bore versions of the durable 472 (which was introduced in late 1967 for the '68 model year). The larger 500 had the 472's bore but a longer stroke. This engine family was the last Cadillac cast-iron engine, and the last 'big-block'. During this period, an assortment of engines were offered in the interest of fuel economy. These included the Buick 252 V6, diesel Oldsmobile 350 V8, and of Cadillac's own "HT-4100" small block V8, an alloy unit with cast iron cylinder liners which was troublesome and prone to early failure. The first two were dropped in 1982 once gas prices began falling while the latter persisted through 1986.

For 1985, Cadillac introduced a brand-new front-wheel drive platform for DeVille and Fleetwood. This car featured two "firsts"; it had the first transverse mounted V8 ever (the HT4100) and it was the first car to have a high mounted rear stop-lamp that was federally mandated starting in the 1986 model year. The rear wheel drive 1985 Cadillac Fleetwood Brougham continued on nearly unchanged from the 1984 model. 1985 was the final model year for the Fleetwood Brougham coupe. In 1986, the HT-4100 V8 was replaced with an Oldsmobile-sourced 307 cubic inch (5.0 L) V8 in the Fleetwood Brougham. 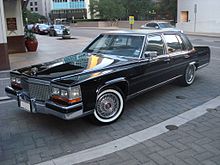 The Fleetwood name was dropped from the Fleetwood Brougham in 1987, which continued to be produced as simply the Cadillac Brougham. It was otherwise the same as the 1986 model. The reason for the change was that Cadillac had introduced a new, smaller, front-wheel drive model in 1985 and named it simply the Fleetwood. The Brougham remained in production through 1992.