The Cadillac STS (Seville Touring Sedan) is a mid-sized luxury 4-door sedan manufactured and sold by General Motors from 2004 to 2011 for the 2005 to 2011 model years. A version of the STS was sold in China as the SLS through 2013. It was equipped with a six-speed automatic transmission with performance algorithm shifting and driver shift control.[7]

The STS was the successor to the Cadillac Seville,[6] which beginning in 1987 was available as an upscale performance-oriented STS (for Seville Touring Sedan) version, and comfort-oriented SLS (for Seville Luxury Sedan). The next year, the STS received Cadillac's then-new Northstar System, including the aluminium DOHC L37 Northstar V8 engine.

While smaller than the full-size DTS, the more expensive STS was the flagship sedan of the Cadillac brand.[8]

The Cadillac STS was rated with a four star frontal and five star rear passenger crash test rating from the National Highway Traffic Safety Administration.[9] It was given an overall "Good" score in the Insurance Institute for Highway Safety frontal crash test and an "Acceptable" rating in the side impact test.[10] In the side impact test injury measurements to the driver's pelvis was rated "Poor" and for the torso "Acceptable."[11]

The front wheel drive Seville model name was retired in 2004, succeeded by an entirely new "STS" based on the rear wheel drive GM Sigma platform. The first Cadillac sedan to be offered with All wheel drive, it retained the Seville's high-performance Magnetic Ride Control suspension. The Cadillac STS was assembled at GM's Lansing Grand River facility in Lansing, Michigan along with the smaller CTS sedan.

The STS was updated for 2008. Changes included a refreshed exterior, with styling cues resembling the 2008 CTS, such as larger, more aggressive grille and chrome fender vents. The interior was updated, with new materials and a new steering wheel, though the overall interior design remained the same, despite previous rumors of an all-new interior similar to that of the Chinese-market SLS. The standard powertrain was a direct-injected 3.6 L V6 mated to a six-speed automatic transmission, which in the STS produced 302 hp (225 kW) and 272 lb⋅ft (369 N⋅m) of torque. It also offered enhanced safety features, including a lane departure warning system developed by Mobileye, a blind spot monitoring system, and an improved version of GM's StabiliTrak stability control system, which could operate the steering system in addition to the brakes to help correct a skid. Additionally, options previously limited to the V8 model (such as HID headlamps and Automotive head-up display) were available with the V6. The 2008 Cadillac STS debuted at the 2007 New York Auto Show.[12] 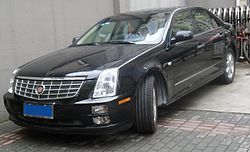 GM discontinued the production of the SLS in February 2013.[16]

The final STS was assembled on May 4, 2011.[24] The enlarged third generation rear-wheel drive CTS sedan introduced in 2013 as a 2014 model, similar in size and price to the STS, effectively succeeded it.