Cizre (pronounced [ˈdʒizɾe]; Kurdish: Cizîr‎[3], Classical Syriac: ܓܙܝܪܐ‎ Gzirā or Gziro) is a town and district of Şırnak Province in the Southeastern Anatolia Region of Turkey, on the Turkey-Syria border. It is in Turkish Kurdistan, just to the northwest of the Turkish–Syrian–Iraqi tripoint.

Cizre is populated by a majority of Kurds, in addition to Assyrian/Syriac people, Arabs, Turks and Armenians. It is surrounded by the Tigris on the north, east and south; this gives it its name, which means "island" in Arabic (جزيرة, jazīra).

During the Early Iron Age, Cizre was in the kingdom of Kumme, north of Assyria. In classical antiquity, it was located in Corduene (Kardu). In 19th century scholarship, it was often named as the location of Alexander's crossing of the Tigris in 331 BC, and was identified with the Roman stronghold of Bethzabde (Syriac: ܒܝܬ ܙܒܕܝ‎, Bēṯ Zaḇdai). However, modern scholarship rejects this - James Crow notes: "It was formerly thought that Bezabde stood close to modern Cizre, on the west bank of the Tigris. However archaeological survey has located a major Late Roman site at Eski Hendek, 13 km (8 miles) north-west of Cizre. The outline of the city is trapezoidal and was aligned above the river. It may be seen to be divided into two distinct enclosures, with an annexe to the west and clear traces of projecting towers and multiple defences".[6]

Bethzabde was part of the Roman province of Mesopotamia. The chronicler Msiha Zkha speaks of three bishops of Beth Zabdai in the 2nd and 3rd centuries: Merza, Soubha-liso, and Sabtha.[7] In 360 Bishop Theodorus was deported by the Persians, along with the general population, and died as a result of the forced march. Another bishop, Maras, was one of the Fathers of the Council of Chalcedon in 451 and in 458 was one of the signatories of the letter of the bishops of Mesopotamia to Emperor Leo I the Thracian after the death of Proterius of Alexandria.[8][9]

In the late 4th or early 5th century Beth Zabdai or Jezira became a Nestorian bishopric, known as Beth Zabdai (later Gazarta d'Beth Zabdai). On entering into communion with Rome, it became the eparchy of Gazarta of the Chaldean Catholic Church. In 639 it became the seat also of the Syriac Orthodox Church and in 1863 the eparchy Gazarta of the Syriac Catholic Church. These Christians were severely reduced in the 1915 Seyfo massacres and the structures were allowed to lapse or were incorporated into other jurisdictions. Bethzabda is today listed by the Catholic Church as a titular see,[10] but has not been assigned to any bishop.

In medieval Islamic tradition, Cizre is the location of Thamanin, the town founded by Noah at the foot of Mount Judi where Noah's Ark came to rest, and a "tomb of Noah" as well as a "tomb of Mem and Zin" can be visited in Cizre. Al-Masudi (d. 956) reports that the spot where the ark landed could still be seen in his time. Benjamin of Tudela in the 12th century adds that ʿUmar ibn al-Khaṭṭāb had made the remnants of the ark into a mosque.

In the 19th century, it was the site of a Kurdish rebellion of Bedir Khan Beg from the Emirate of Bhotan against the Ottoman Empire. They rebellion was eventually subdued in 1847.[11][12]

Cizre was home to an Armenian community of about 3,000. However, in late June 1915, during the Armenian Genocide, the Armenian males, along with a few Syriac bishops, were arrested, tortured, and subsequently murdered. Many of the victims had their throat slit and were then thrown into the river Tigris. The women were deported on rafts towards Mosul. A few survived through the means of adoption by local Kurds; however, most were raped and/or drowned.[13] The remaining Armenian population, located in the rural parts of Cizre, was massacred on 8 August 1915. Few managed to survive.[14][15]

Within the Turkish Republic, Cizre was part of the Mardin Province until 1990, when it was incorporated into the newly established Şırnak Province. 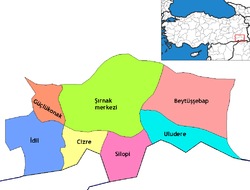 Cizre is located on the River Tigris, which forms the border line with Syria at this area. The state roads

E90) (via Nusaybin) that connect Mardin with Şırnak, as well as the route

to Silopi run through the town.

In October 2014 least 35 people were killed when riots broke out in the city over Turkey’s response to the civil war in neighbouring Syria, blocking Kurdish fighters from crossing the border into Syria.[17] 17 of its citizens who fought with fellow Kurds died in Syria during the Siege of Kobanî.[12]

During the Kurdish–Turkish conflict in September 2015, Cizre was blockaded by Turkish Security Forces, who besieged the town and placed a curfew for eight days, after the YDG-H, an organization founded by youth who sympathize with the Kurdistan Workers' Party (PKK), in an attempt at self-rule, had raised barricades, planted explosives and dug trenches in the city.[18][19] During the curfew the town had limited access to water and food and many of the injured were prohibited to receive professional medical treatment. According to the Turkish government, most of the dead were PKK militants, however, according to the pro-Kurdish Peoples' Democratic Party, 20 civilians were killed.[20] The Council of Europe raised concerns about "disproportionate use of force by security forces against civilians."[21]

On 13 December 2015, the Turkish authorities renewed the curfew on Cizre city to repress Kurdish militants. The siege lasted until 11 February 2016. The Turkish Army stated that 659+ PKK militants had been killed during the curfew. By 14 February, 123 bodies were reportedly amassed in local morgues, most of the bodies were reported to have been burnt. On 7 February, a large-scale operation was conducted in the Cudi neighbourhood and a number of buildings were hit by artillery. Turkish army claimed that 10 PKK militants had been killed in the operation, whilst pro-Kurdish sources claimed that those killed were civilians. Pro-Kurdish Peoples' Democratic Party (HDP) claimed that 70–90 injured civilians had been forced to stay in the basements of buildings in Cudi for 20 days.[22] On 11 February, military operations in the city ceased.[23] On 1 March 2016, it was announced that the curfew would end the following day.[23] Human rights groups claimed that 263 had been killed, including at least 92 civilians.[19]

By March 2016, residents started returning to a devastated city. According to IB Times, the level of damage to the city was comparable to the Siege of Kobanî. Prime Minister Ahmet Davutoğlu pledged to rebuild Cizre.[19][18]

In April 2016, the Turkish Human Rights Association (IHD) submitted a report to the United Nations High Commissioner for Human Rights (OHCHR) concerning the killing of 120 Kurdish civilians in Cizre. [24]

On 26 August 2016, 11 police officers were killed and 78 other people wounded when an explosives-laden truck was detonated at a police checkpoint about 50 metres from a police station near the town. The state-run Anadolu Agency blamed the Kurdistan Workers' Party for the attack.[25]

$3.4 billion reconstruction plan started after the operations for the damaged areas. 67,000 homes were planned to be built as well as factories, hospitals, sports stadiums, and police stations. [26]

The former mayor of Cizre, , was arrested in December 2009 as part of the KCK investigation. In October 2011 he was removed from office by the Ministry of the Interior before his trial had concluded.[27]

In 2014 Leyla İmret was elected as mayor. As a 27-year-old woman, she was the first female mayor of Cizre and one of the youngest mayors in Turkey.[28] During the siege of Cizre, she was removed from her post for charges of inciting hatred and supporting terrorism.[29]

In the Municipal elections 2019 Mehmet Ziriğ was elected mayor of Cizre with 76.99% of the votes.[30] In late October 2019, Ziriğ was dismissed and Kaymakam Davut Sinanoğlu was appointed as an acting Mayor.[31]