The company was founded by pioneer radio station operator Powel Crosley and was based in Cincinnati, Ohio. Its flagship station, WLW (AM), was first licensed in March 1922.[1] Most of its broadcast properties adopted call signs with "WLW" as the first three letters. In the 1930s, WLW had an effective power of 500,000 watts, and was the only commercial U.S. AM radio station ever to be permitted to transmit regularly with more than 50,000 watts. By the 1950s, the company operated a small television network in Ohio and nearby states.

During World War II, Crosley built the Bethany Relay Station in Butler County, Ohio's Union Township, one mile west of its transmitter for WLW, for the Office of War Information. It operated as many as five shortwave radio stations, using the call signs WLWK, WLWL, WLWO, WLWR and WLWS. Many of these stations were later incorporated into the Voice of America. Crosley operated the facilities for the government until 1963.

In 1945, the Crosley interests were purchased by Aviation Corporation. The radio and appliance manufacturing arm changed its name to Avco, but the broadcast operations continued to operate under the Crosley name until they adopted the Avco name in 1968.

Crosley (Avco) also owned WLWF, an FM radio station it operated along with its WLWC (now WCMH-TV). WLWF went silent in 1953, and Crosley (Avco) returned its license to the Federal Communications Commission (FCC). In the late 1950s, a construction permit for a new station on WLWF's frequency was granted to Taft Broadcasting, owner of WTVN-TV also in Columbus (now WSYX-TV), which signed on the station in late 1959 as WTVN-FM (now WLVQ-FM).

From the 1950s through the 1970s, Crosley operated a small television network in which programs were produced at one of its stations and broadcast on the other Crosley stations in the Midwest, and occasionally by non-Crosley stations as well. The company occasionally produced programs picked up for broadcast on either NBC or the DuMont Television Network. Programs which aired nationally included NBC's Midwestern Hayride (on which Rosemary Clooney often performed) and Breakfast Party. Other programs originated on the Crosley network included DuMont's The Paul Dixon Show and The Ruth Lyons 50-50 Club. The Phil Donahue Show started in 1967, originating from WLWD in Dayton, Ohio. 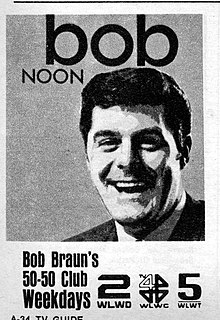 1969 Advertisement for The Bob Braun Show appearing in TV Guide.

In the 1970s, Avco sold all of its broadcasting holdings. In 1975, it sold WLWC-TV in Columbus, WLWI-TV in Indianapolis, WOAI-AM-FM-TV in San Antonio (the AM station was sold to the nascent Clear Channel Communications as the chain's second property), and WWDC-AM-FM in Washington D.C.. In 1976, it sold WLW and WLWT-TV in Cincinnati, WLWD-TV in Dayton, and its Avco Embassy Television and Avco Embassy Program Sales divisions. In 1977, it sold KYA-AM-FM in San Francisco and WRTH in Wood River/St. Louis.

The closest equivalent to a "successor" to Avco Broadcasting was Multimedia, Inc.. Avco sold flagship TV station WLWT to Multimedia, as well as Avco Program Sales in 1976. In December 1995, Gannett (which owned former Crosley station WXIA-TV in Atlanta) acquired Multimedia, Inc., while the respective syndication division was acquired by MCA Universal. By 1997, all of the original Crosley radio and television properties had been sold off by its successor companies, with the exception of WTHR in Indianapolis, which is still owned by an affiliate of the Dispatch Broadcast Group.

The deserted ruins of the major Crosley manufacturing facility can still be seen on the west side of [[Interstate 75 in Ohio|I-75], just north of the area where the Cincinnati Museum Center (previously the Union Terminal train station) is currently located and near where Crosley Field once stood. The impressively huge transmission tower and old 50,000-watt transmitter at the Tylersville Road facility near U.S. Route 42 (Reading Rd.), between Dayton and Cincinnati, still exists. 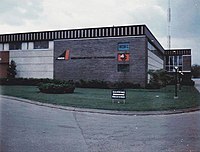 By the 1970s, the Crosley name had ceased to exist in the memory of most American citizens (as would that of its major successor company, Avco, a decade later), but many of the "WLW-" station call-letters persist.

WCMH-TV used the WLWC call letters from its 1949 sign-on until the station was sold to Outlet Broadcasting in 1976. In the 1990s, WCMH entered into an agreement to manage the operations of WWHO in the Columbus market under a "local marketing agreement" (LMA) with Fant Broadcasting, owner of WWHO-TV. Outlet, in turn, owned 20% of Fant. Due to the success of this arrangement, WCMH's sister station WJAR in Providence, Rhode Island entered into a similar arrangement to operate Channel 28 in that market, also owned by Fant.

The WLWI call letters are used by an AM and FM radio station serving the Montgomery, Alabama radio market.

Broadcast outlets operated by Crosley Broadcasting or its successor Avco include:

Stations are arranged in alphabetical order by state and city of license.

Note: Two boldface asterisks appearing following a station's call letters (**) indicate a station that was built and signed-on by Crosley/Avco.