Gases emitted as a result of fuel reactions in combustion engines 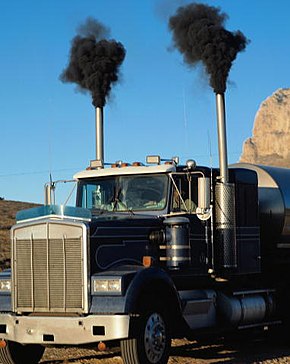 This diesel-powered truck emits an exhaust gas rich in black particulate matter when starting its engine.

Exhaust gas or flue gas is emitted as a result of the combustion of fuels such as natural gas, gasoline, petrol, biodiesel blends,[1] diesel fuel, fuel oil, or coal. According to the type of engine, it is discharged into the atmosphere through an exhaust pipe, flue gas stack, or propelling nozzle. It often disperses downwind in a pattern called an exhaust plume.

It is a major component of motor vehicle emissions (and from stationary internal combustion engines), which can also include:

Motor vehicle emissions contribute to air pollution and are a major ingredient in the creation of smog in some large cities. A 2013 study by MIT indicates that 53,000 early deaths occur per year in the United States alone because of vehicle emissions.[2] According to another study from the same university, traffic fumes alone cause the death of 5,000 people every year just in the United Kingdom.[3]

The largest part of most combustion gas is nitrogen (N2), water vapor (H2O) (except with pure-carbon fuels), and carbon dioxide (CO2) (except for fuels without carbon); these are not toxic or noxious (although water vapor and carbon dioxide are greenhouse gases that contribute to global warming). A relatively small part of combustion gas is undesirable, noxious, or toxic substances, such as carbon monoxide (CO) from incomplete combustion, hydrocarbons (properly indicated as CxHy, but typically shown simply as "HC" on emissions-test slips) from unburnt fuel, nitrogen oxides (NOx) from excessive combustion temperatures, and particulate matter (mostly soot). 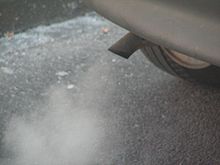 Steam from tailpipe of cold car

During the first two minutes after starting the engine of a car that has not been operated for several hours, the amount of emissions can be very high. This occurs for two main reasons:

In 2000, the United States Environmental Protection Agency began to implement more stringent emissions standards for light duty vehicles. The requirements were phased in beginning with 2004 vehicles and all new cars and light trucks were required to meet the updated standards by the end of 2007. 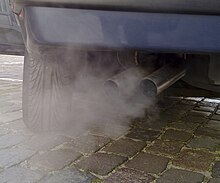 In spark-ignition engines the gases resulting from combustion of the fuel and air mix are called exhaust gases. The composition varies from petrol to diesel engines, but is around these levels:

The 10% oxygen for "diesel" is likely if the engine was idling, e.g. in a test rig. It is much less if the engine is running under load, although diesel engines always operate with an excess of air over fuel.[citation needed] The CO content for petrol engines varies from ~ 15ppm for well tuned engine with fuel injection and a catalytic converter up to 100,000 ppm (10%) for a richly tuned carburetor engine, such as typically found on small generators and garden equipment.[8]

Exhaust gas from an internal combustion engine whose fuel includes nitromethane will contain nitric acid vapour, which is corrosive, and when inhaled causes a muscular reaction making it impossible to breathe. People who are likely to be exposed to it should wear a gas mask.[9]

What looks like exhaust from jet engines is actually contrail.

In jet engines and rocket engines, exhaust from propelling nozzles which in some applications shows shock diamonds.[citation needed]

In steam engine terminology the exhaust is steam that is now so low in pressure that it can no longer do useful work.

Mono-nitrogen oxides NO and NO2 (NOx)(whether produced this way or naturally by lightning) react with ammonia, moisture, and other compounds to form nitric acid vapor and related particles. Small particles can penetrate deeply into sensitive lung tissue and damage it, causing premature death in extreme cases. Inhalation of NO species increases the risk of lung cancer[10] and colorectal cancer.[11] and inhalation of such particles may cause or worsen respiratory diseases such as emphysema and bronchitis and heart disease.[12][13][14]

In a 2005 U.S. EPA study the largest emissions of NOx came from on road motor vehicles, with the second largest contributor being non-road equipment which is mostly gasoline and diesel stations.[14]

The resulting nitric acid may be washed into soil, where it becomes nitrate, which is useful to growing plants.

When oxides of nitrogen (NOx) and volatile organic compounds (VOCs) react in the presence of sunlight, ground level ozone is formed, a primary ingredient in smog. A 2005 U.S. EPA report gives road vehicles as the second largest source of VOCs in the U.S. at 26% and 19% are from non road equipment which is mostly gasoline and diesel stations.[15] 27% of VOC emissions are from solvents which are used in the manufacturer of paints and paint thinners and other uses.[16]

Ozone is beneficial in the upper atmosphere,[17] but at ground level ozone irritates the respiratory system, causing coughing, choking, and reduced lung capacity.[18] It also has many negative effects throughout the ecosystem.[19] 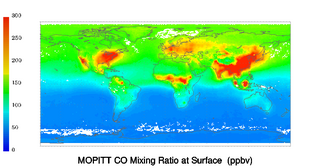 Carbon monoxide poisoning is the most common type of fatal air poisoning in many countries.[20] Carbon monoxide is colorless, odorless and tasteless, but highly toxic. It combines with hemoglobin to produce carboxyhemoglobin, which blocks the transport of oxygen. At concentrations above 1000ppm it is considered immediately dangerous and is the most immediate health hazard from running engines in a poorly ventilated space. In 2011, 52% of carbon monoxide emissions were created by mobile vehicles in the U.S.[21]

Chronic (long-term) exposure to benzene (C6H6) damages bone marrow. It can also cause excessive bleeding and depress the immune system, increasing the chance of infection. Benzene causes leukemia and is associated with other blood cancers and pre-cancers of the blood.[22][23]

The health effects of inhaling airborne particulate matter have been widely studied in humans and animals and include asthma, lung cancer, cardiovascular issues, premature death.[24][25][26] Because of the size of the particles, they can penetrate the deepest part of the lungs.[27] A 2011 UK study estimates 90 deaths per year due to passenger vehicle PM.[28] In a 2006 publication, the U.S. Federal Highway Administration (FHWA) state that in 2002 about 1 per-cent of all PM10 and 2 per-cent of all PM2.5 emissions came from the exhaust of on-road motor vehicles (mostly from diesel engines).[29]

Carbon dioxide is a greenhouse gas. Motor vehicle CO2 emissions are part of the anthropogenic contribution to the growth of CO2 concentrations in the atmosphere which according to the vast majority of the scientific community is causing climate change.[30] Motor vehicles are calculated to generate about 20% of the European Union's man-made CO2 emissions, with passenger cars contributing about 12%.[31] European emission standards limit the CO2 emissions of new passenger cars and light vehicles. The European Union average new car CO2 emissions figure dropped by 5.4% in the year to the first quarter of 2010, down to 145.6 g/km.[32]

There has been research into ways that troops in deserts can recover drinkable water from their vehicles' exhaust gases.[33]

Emission standards focus on reducing pollutants contained in the exhaust gases from vehicles as well as from industrial flue gas stacks and other air pollution exhaust sources in various large-scale industrial facilities such as petroleum refineries, natural gas processing plants, petrochemical plants and chemical production plants.[34][35] However, these are often referred to as flue gases. Catalytic converters in cars intend to break down the pollution of exhaust gases using a catalyst. Scrubbers in ships intend to remove the sulfur dioxide (SO2) of marine exhaust gases. The regulations on marine sulfur dioxide emissions are tightening, however only a small number of special areas worldwide have been designated for low sulfur diesel fuel use only.

One of the advantages claimed for advanced steam technology engines is that they produce smaller quantities of toxic pollutants (e.g. oxides of nitrogen) than petrol and diesel engines of the same power.[citation needed] They produce larger quantities of carbon dioxide but less carbon monoxide due to more efficient combustion.

Researchers from the University of California, Los Angeles School of Public Health say preliminary results of their statistical study of children listed in the California Cancer Registry born between 1998 and 2007 found that traffic pollution may be associated with a 5% to 15% increase in the likelihood of some cancers.[36] A World Health Organization study found that diesel fumes cause an increase in lung cancer.[37]

The California Air Resources Board found in studies that 50% or more of the air pollution (smog) in Southern California is due to car emissions.[citation needed] Concentrations of pollutants emitted from combustion engines may be particularly high around signalized intersections because of idling and accelerations. Computer models often miss this kind of detail.[38]