This article is about the U.S. chemical company. For other companies, see FMC.

FMC Corporation (Food Machinery Corporation) is an American chemical manufacturing company headquartered in Philadelphia, Pennsylvania, which originated as an insecticide producer and later diversified into other industries. The company was founded by chemist John Bean in 1883 as the Bean Spray Pump Company in Los Gatos, California, producing piston pumps for insecticides. In 1928, Bean Spray Pump purchased two companies: the Anderson-Barngrover Co. and Sprague-Sells Co. At this time the company changed its name to Food Machinery Corporation, but in 1948 changed that to Food Machinery & Chemical Corporation. In 1961, the name was changed again to FMC. In 1941 the company received a contract to design and build amphibious tracked landing vehicles for the United States Department of War,[3] and afterwards the company continued to diversify its products. Later FMC produced the M113, one of the most widely used AFVs ever. FMC employs 7,000 people worldwide, and had gross revenues of US$2.8 billion in 2017.[4][5][6]

Founded in 1883 as the Bean Spray Pump Company in Los Gatos, California[7] by chemist John Bean. The company's first product was a piston pump. Bean invented the pump to spray insecticide on the many fruit orchards in the area. A Bean sprayer was on display at the Forbes Mill museum in Los Gatos until its closure in 2014.[8][9] Bean Avenue in downtown Los Gatos is named after John Bean.

FMC was awarded a contract to design and build amphibious tracked landing vehicles for the United States Department of War in 1941. FMC ranked 64th among United States corporations in the value of World War II military production contracts.[3]

In 1961, the United States Navy's Bureau of Ships issued bids for a high performance amphibious ship-to-shore cargo carrier capable of moving over water at 35 knots (approx. 40 mph) and over ground at the same speed. It had to carry five tons of cargo across water, through the surf, across the beach, and inland. The vehicle also had to be quickly loaded and unloaded under combat conditions. FMC's Ordnance Division in San Jose, California built and tested two prototypes named "LVHX2 Landing Vehicle, Hydrofoil" for the United States Marine Corps. These were the first amphibious landing vehicles to make use of hydrofoils for high speed ship-to-shore operation. Although the LVHX2 never went into production, the Marine Corps used the prototypes in their continuous research and development program to develop better equipment for amphibious assault operations.

FMC later built the M113 Armored Personnel Carrier (APC), the Bradley Fighting Vehicle, and the XR311 at its former facility in Santa Clara, California. It also purchased the rights to manufacture some foreign military hardware, including the Brazilian EE-9 Cascavel, under license.[11] Bean also manufactured firefighting equipment in the 1960s through the 1980s under the FMC and the Bean names.

In 1972, personnel were transferred from ordnance to designing and building recreational vehicles (motorcoaches). The oil crisis and high prices led production to end after five years.[12]

FMC also produced fire truck fire pumps and pumper bodies. It had an original equipment manufacturer (OEM) arrangement with Ladder Towers Inc. (LTI) to market aerial ladders. In the early 1980s the firefighting apparatus division of FMC tried to expand its role in aerial ladders on fire trucks, leveraging the Link-Belt crane division. FMC's expansion into production of aerial ladders failed: the FMC Fire Apparatus division was shut down in 1990.

FMC sells chemical products used by beef and poultry processors to reduce pathogens, such as E. coli and salmonella, on uncooked beef and poultry.[13] FMC obtained a patent on a method for sanitizing fowl that have been killed, plucked and eviscerated by contacting the fowl with an aqueous acid solution and maintaining that contact for a time sufficient to sanitize the fowl.[13] 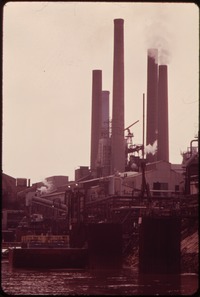 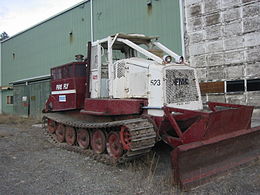 FMC 210 Skidder made by FMC

In 1946, FMC bought Bolens Lawn and Garden Equipment. FMC changed its name again in 1948, becoming Food Machinery and Chemical Corporation. In 1961 the name was changed to FMC Corporation.

Between 1965 and 1985 FMC was the owner of the Gunderson metal works in Springfield, Oregon, during that period it was known as the "Marine and Rail Equipment Division of FMC" (MRED), it was sold in 1985 to The Greenbrier Companies.[14]

In the 1980s, 1990s, and 2000s, FMC Corporation began spinning several of its divisions into separate companies, including United Defense and FMC Technologies, and selling its divisions, including its automotive division to Snap-on Equipment, a division of Snap-on, in 1996. Snap-on renamed the division the "John Bean Company".[15] Bolens was sold to Troy-Bilt in 1988.

FMC Technologies was an American company that produced equipment for exploration and production of hydrocarbons. FMC Technologies was incorporated in 2000 when FMC Corporation divested its machinery businesses. It exists today as a part of TechnipFMC, after a merge with Technip in 2017.

FMC Corporation operated a phosphate mine and plant in Idaho on the Fort Hall Indian Reservation of the federally recognized Shoshone-Bannock Tribes. Between 1949 and 2001, it produced an estimated 250 million pounds of elemental phosphorus annually. In 1989, as part of what is termed the , its 1500-acre plant site was designated by EPA under the Comprehensive Environmental Response, Compensation, and Liability Act of 1980 (CERCLA) as a Superfund site because of extensive water and land pollution caused by these operations. After working to improve operations and air quality, the company abandoned the plant and related mine in 2001 because of much higher electricity costs and the challenge of cheaper phosphate coming from China. Seventeen mines in the area have been designated as Superfund sites because of selenium poisoning.[19]

FMC Corporation operated a plant in Fridley Minnesota several hundred feet east of the Mississippi river from the 1940s until 1969 where it disposed of waste such as solvents, paint sludge, and plating wastes in an on-site dump. In the early 1980s, contamination from the on-site dump contaminated the Mississippi River, and nearby drinking water for the city of Minneapolis.

FMC Corporation operated a pesticide formulation plant from 1951 until 1986 in Yakima, Washington. From 1952 to 1969, FMC disposed of agricultural pesticides in a pit on site. In 1983 the site was listed in the EPA Superfund list, after groundwater and soil was found to be contaminated with pesticides. After an EPA order, FMC was forced to dispose of 850 tons of contaminated soil between 1988 and 1989. In 1990, EPA required FMC to incinerate soils on-site.[20]

At its Dublin Road Site, located in north-western New York in Orleans County, FMC Corporation from 1933 to 1968 disposed of coal ash cinders, laboratory wastes consisting of glass bottles and chemical residues, residues from lime sulfur filtration, building debris and residues from pesticide production areas. These materials contained metals in the form of salts and pesticides/insecticides.[21]

In 2009, CBS 60 Minutes ran an exposé on the use by farmers in Kenya of an FMC–produced pesticide, Furadan, as a poison to kill African lions. The piece suggested that Furadan was a serious threat to the future of the lion population in Africa.[22] FMC has commented extensively on this issue through the media and their websites, including furadanfacts.com.[23] They engaged with government officials, non-governmental organizations, and others to try and resolve the illegal use of their pesticides to kill wildlife. The company took action to stop the sale of this product and instituted a buy-back program in East Africa when it determined that the illegal and intentional misuse of chemicals against wildlife could not be controlled by education or stewardship programs alone.[24][25]