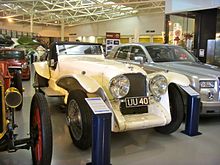 A 1927 Leyland Eight, with sports bodywork

The Leyland Eight was a luxury car produced by Leyland Motors from 1920 to 1923.

The car was designed by the chief engineer of Leyland Motors, J.G. Parry-Thomas and his assistant Reid Railton, and was intended to be the finest car available.[3] It was the first British car with a straight-eight engine.[4] The Eight was introduced to the public at the 1920 International Motor Exhibition at Olympia, London, where it was referred to as the "Lion of Olympia".[4][5]

Transmission was through a single plate clutch to a separately mounted four speed gearbox. The rear axle was unconventional with the differential mounted ahead of the axle. The spiral bevel crown wheel and pinion arrangement had two crown wheels each attached to a half shaft allowing them to be arranged at an angle to each other to give the rear wheels a positive camber.

The channel section chassis had suspension by leaf springs at the front and a mix of leaf springs and torsion bars at the rear.[4] At the front semi-elliptical springs were used with radius arms controlling fore and aft movement of the axle. The radius arms were joined by a torsion bar across the front of the chassis to act as an anti-roll bar. At the rear the quarter-elliptical springs had their front ends mounted in a boss that was attached to a short transverse torsion bar which controlled the rotation of the boss making the suspension a hybrid arrangement. As at the front linked radius rods provided axle location and anti-roll properties.[2]

The brakes, with vacuum servo assistance, were on the rear wheels only.[4]

Factory-made bodies were available in open tourer style with either two or five seats and chassis were also supplied to customers for their choice of coachbuilders which included Vanden Plas and Windovers.[2] The car was very expensive, the chassis for delivery to a coachbuilder costing £2,500 in 1920 reducing to £1,875 in 1922 [1] and only about 18 were made.[1][4] It was the most expensive British car of its day.[1]

Today, the only example known to exist, a Leyland-Thomas, is one assembled from spares in 1929[2] and in the collection of the Heritage Motor Centre.[7]

After amicably leaving Leyland in 1922 J. G. Parry-Thomas moved to premises at Brooklands race track taking with him at least three chassis and a large quantity of spares.[2] There he built the Leyland-Thomas, a racing special based on the Leyland Eight.[5] After the death of Parry Thomas his premises were taken over by Thomson & Taylor who built the car now owned by the British Motor Industry Heritage Trust.

Michael Collins, the Irish politician and revolutionary leader, was travelling in a Leyland Eight when he was fatally shot in 1922.

Two cars were ordered by the Maharaja of Patiala but are not thought to survive.[2]