The term is subjective and reflects both the qualities of the car and the brand image of its manufacturer.[1] Luxury brands rank above premium brands,[2] though there is no fixed demarcation between the two. 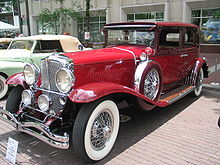 A Duesenberg, "one of the great luxury cars"[3] with custom body by Willoughby 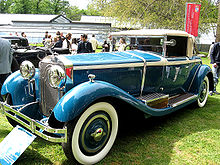 Some auto manufacturers market their luxury models using the same marque as the rest of their line. Others have created a separate marque (e.g. Lexus, launched by Toyota in 1989)[5] or purchased one (e.g. Bentley, by Volkswagen in 1998).[6][7] Occasionally, a luxury car is initially sold under a mainstream marque and is later rebranded under a specific luxury marque (for example the Hyundai Genesis G80).[8][9] For mass-produced luxury cars, sharing of platforms or components with other models is common,[10] as per modern automotive industry practice.

Several car classification schemes which include a luxury category, such as:

The premium compact class is the category of the smallest luxury cars. It became popular in the mid-2000s, when European manufacturers— such as Audi, BMW, and Mercedes-Benz— introduced new entry-level models that were smaller and cheaper than their compact executive models.[21]

Executive car is a British term for an automobile larger than a large family car. In official use, the term is adopted by Euro NCAP, a European organization founded to test for car safety. It is a passenger car classification defined by the European Commission.

The next category of luxury cars is known in Great Britain as a luxury saloon or luxury limousine,[31][32][33][34] and is known in the United States as a full-size luxury sedan, large luxury sedan or flagship sedan.[35][36][37][38] It is the equivalent of the European F-segment and German Oberklasse segment.

Many of these luxury saloons are the flagship for the marque and therefore include the newest automotive technology.[39] Several models are available in long-wheelbase versions, which provide additional rear legroom and often a higher level of standard features.[40]

Luxury cars costing over US$100,000 (as of 2007) can be considered as "ultra-luxury cars".[44] Examples include the Rolls-Royce Phantom, Maybach 57, Bentley Arnage, and Toyota Century.[44][45][46] High-end sports cars which are targeted towards performance rather than luxury are not usually classified as ultra-luxury cars, even when their cost is greater than US$100,000.[44] The history of a brand and the exclusivity of a particular model can result in price premiums compared to luxury cars with similar features from less prestigious manufacturers.[47]

Long before the luxury SUV segment became popular in the 1990s, the vehicle in this segment was the 1966 Jeep Super Wagoneer,[48][49][50](p3) which was marketed at the time as a station wagon. It was the first off-road SUV to offer a V8 engine, automatic transmission, and luxury car trim and equipment.[51] Standard equipment included bucket seating, a center console, air conditioning, seven-position tilt steering wheel, a vinyl roof and gold colored trim panels on the body sides and tailgate.[50](p3) By the late 1970s, optional equipment included an electric sunroof,[50](p4) The 1978 Jeep Wagoneer Limited was the spiritual successor to the Super Wagoneer and was the first four-wheel drive car to use leather upholstery.[50](p5)

Another precursor to the luxury SUV is the Range Rover, which was released in 1970. It was the first road-going vehicle to have a permanent four-wheel drive system, split tailgate, clamshell bonnet and continuous waistline (in the same vehicle).[52] The Range Rover had long-travel coil spring suspension and an aluminium V8 engine.[53] Development of the Range Rover began in 1951.[54]

In the mid 1990s, the SUV market expanded with new entrants. By the mid-1990s, the entry-level Ford Explorer and upscale Jeep Grand Cherokee were the market leaders for SUVs.[55] The fastest growing sector of this market was for the so-called luxury SUVs, which included the Jeep Grand Cherokee ... the Grand Cherokee's allure: "This vehicle is proof you can have a true off-road vehicle without giving up luxuries and amenities" with the Jeep providing a crucial new intangible factor for buyers—image.[56]

The SUV models generated higher profit-margins than passenger cars, and car manufacturers began introducing new luxury SUVs during the late 1990s.[57] SUVs such as the 1995 Lexus LX, 1997 Mercedes-Benz M-Class and 1998 Lincoln Navigator were the first SUVs produced by these luxury car brands. Some of these early luxury SUV models used a unibody construction, becoming part of the trend moving away from the body-on-frame construction traditionally used by off-road vehicles.

During the mid-2000s, SUVs from luxury car brands grew at almost 40 percent in the United States to more than 430,000 vehicles (excluding SUV-only brands like Hummer and Land Rover), at a time when luxury car sales suffered a 1% decline, and non-luxury SUV sales were flat. By 2004, 30 percent of major luxury brands' U.S. sales were SUVs. Crossover SUVs became increasingly popular in the mid-2000s, and manufacturers also began to produce luxury versions of crossovers. The Lexus RX was the earliest luxury crossover on the market, and it has since been the best-selling luxury vehicle in the US.[58] Some luxury crossovers are built on a platform shared with sedans or hatchbacks, for example the Infiniti FX is based upon the same platform as the Infinite G35 sedans and coupes.[59][60] While early luxury crossovers released in the late 1990s have resembled traditional boxy SUVs, later crossovers, such as the Infiniti FX and BMW X6, have been designed with a sporting appearance.[61][62][63]

Despite the increased popularity of crossover models, luxury versions of traditional SUVs remain in production, often being badge-engineered versions of their non-luxury SUVs. Examples include the Lexus LX, Infiniti QX80 and Lincoln Navigator, which are the premium versions of the Toyota Land Cruiser, Nissan Patrol and Ford Expedition respectively.[64]

Research data from the mid-2000s suggested that luxury SUV buyers did not consider traditional luxury cars (e.g. sedans and coupes), therefore the SUV is becoming the key to bringing new customers to the luxury dealerships.[65] 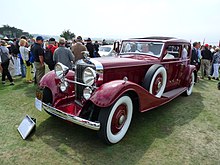 The suspension system of most luxury cars is tuned to prioritise ride quality over handling, however some cars are marketed as "sports luxury" and have greater emphasis on handling characteristics.[69][70]

Traditionally, luxury cars have used a front-engine, rear-wheel drive (FR) layout. The FR layout is more expensive to produce and produces lower fuel economy than a front-wheel drive layout, however it allows for larger engines (particularly straight-six, V8, and V12) to be used.[68][71][72][73] Since the introduction of the Bentley Continental GT in 2003, an increasing number of luxury cars have used all-wheel drive.

Many American luxury cars from the 1970s to the 1990s switched to a front-wheel drive layout with transverse engine, due to the Arab Oil Embargo of 1973 and the 1979 fuel crises which eliminated many FR platforms in favor of the more economical front-wheel drive (FF) layout. From the early 2000s, several of these American luxury cars reverted to FR layouts.[74][75][76][77] 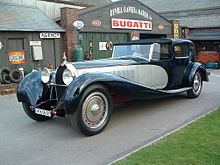 France was a leading producer of powerful luxury automobiles prior to World War II.[78] After World War II, the French government used puissance fiscale tax regulations to encourage manufacturers to build cars with small engines, and French motorists to buy them.[78] The Maserati-powered Citroën SM and the Citroën C6 were arguably the last domestic French luxury cars.[79][80] In the 2010s, some French manufacturers have attempted to develop luxury cars, however the lack of a historical legacy has hindered these efforts.[81] In 2014, Citroën introduced DS Automobiles sub-brand to market luxury cars.[82][83]

In the Soviet Union, the manufacturer ZiL (then called Zis) began producing limousines in the mid-1930s. Later GAZ joined the luxury car market in the early 1950s with the "Chaika" model range.

The luxury car phenomenon began the start of the automobile industry when the wealthy frequently invested in the manufacture of such models to gain the social prestige associated thereby.[84] Emphasis was also placed on custom built coachwork.[85] The 1920s and 1930s were the apogee of production of these very large luxury automobiles from many manufacturers. The significant North Americans manufacturers from 1910-1940 were Cadillac, Chrysler, Cord, Duesenberg, Lincoln, Packard, Peerless, Pierce Arrow and Stutz. Most of them had a straight-eight, V8, V12, or V16 engine. The Great Depression put many luxury car manufacturers out of business; others would hold on before going defunct during the postwar era. 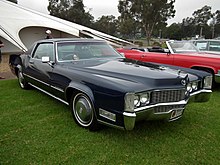 From 1946 to the late 1990s, Cadillac was the top selling brand of luxury cars in the U.S. and Lincoln was second.[86] The most successful and long-running model names during this era were the Cadillac DeVille and Lincoln Continental. The personal luxury car emerged into mass popularity and affordability as an America-specific category of popularly-priced cars made from the 1950s by the four domestic manufacturers (GM, Ford, Chrysler, and AMC) that reached peak popularity in the 1970s. The cars were stylized, mass produced two-door coupés or convertibles, relying on standard components.[87] These distinctively styled cars were targeting the needs of individual customers, not an entire family.[88] The longest running model lines were the 1958-1997 Ford Thunderbird and the 1967-2002 Cadillac Eldorado.

In 1990, American luxury brands dominated with Cadillac selling over a quarter million cars and Lincoln had its best year ever at 231,660 units.[89] However, the market was changing with an ever greater acceptance of smaller, more efficient imported luxury brands while at the same time the domestic manufacturers were downsizing their models with product decisions that backfired on quality and brand respect.[89]

Since the late 1990s, Japanese and German brands have sold the most luxury-type cars in the United States. However the Cadillac Escalade has led the luxury SUV segment sales in the United States since its introduction in 1998, with the highest sales for 15 out of its first 20 years on the market.[90][91]

In the 2000s, both Ford and General Motors produced luxury pickups: the 2002-2013 Cadillac Escalade EXT, 2002-2003 Lincoln Blackwood and 2006-2014 Lincoln Mark LT. In the late 2000s, the Cadillac CTS and Cadillac DTS led to a resurgence in the brand's luxury sedans.[92] The equivalent sedan from the Ford group, the 2008 Lincoln MKS, was also regarded as a significant improvement over previous models.[93] In 2010, BMW was the best-selling luxury vehicle manufacturer by sales, with Audi and Mercedes-Benz the second and third highest selling luxury brands.[94] 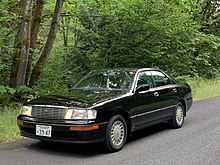 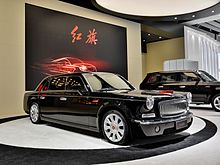 Several Asian manufacturers have created sub-brands for the marketing of luxury cars. The first of these was the 1986 launch of Acura (a Honda sub-brand), followed by Lexus (Toyota) in 1989, Infiniti (Nissan) in 1989 and Genesis (Hyundai) in 2015.[98]

The late-2000s global financial crisis was the first time since the Great Depression of the 1930s that the luxury car market suffered considerably, something not seen in previous economic downturns. Many such customers saw their net worth decline following the collapse in financial markets and real-estate values.[67][99] For example, some of the steepest dropoffs came at the high end, including the BMW 7 Series and Rolls-Royce Phantom, and in 2010 Mercedes-Benz unexpectedly dropped the price of the W212 E-Class. The unusually sharp decline in luxury car sales have led observers to believe that there is a fundamental shift and reshaping of the luxury automotive market, with one industry official suggesting that the marques no longer command the premiums that they used to, and another saying that conspicuous consumption was no longer attractive in poor economic conditions.[98] Additionally, mainstream brands have been able to offer amenities and devices such as leather, wood, and anti-lock brakes, previously found only on luxury cars, as the costs decline.[98]

However, luxury vehicle sales did not collapse as much as their non-luxury counterparts.[100][101] This was aided by growing interest in luxury vehicles from emerging markets such as China and Russia.[98]

Sales in the entry-level luxury segment remained strong throughout the GFC, due to prices being lowered to compete with well-equipped non-luxury cars.[102][103] For example, in Canada, several luxury manufacturers set sales records in August 2009, due mostly to discounted pricing on entry-level luxury vehicles.[104][105]