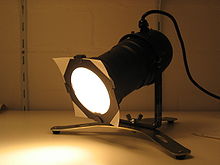 Many PAR lamps are of the sealed beam variety, with a parabolic reflector, one or more filaments, and a glass lens sealed permanently together as a unit. Originally introduced for road vehicle headlamp service, sealed beams have since been applied elsewhere. Halogen sealed beam lamps incorporate a halogen lamp within a quartz or hard glass envelope. Sealed beam lamps come in a variety of standardized sizes and nominal voltage ratings.

Sealed beam headlamp. When the lamp burns out or breaks, the whole assembly must be replaced

A PAR lamp consists of a light source, with lens and a parabolic reflector with a smooth aluminium surface determining the spread of the beam. The most common sealed beam type combines these three elements into an integral unit. The light source usually approximates a point source that can be focused on; tungsten filaments and halogen lamps are common, but some theatrical usage that requires a higher color temperature may use hydrargyrum medium-arc iodide (HMI) instead.

With larger sizes such as the PAR64 and PAR56 found in stage lighting, it is more economical to use a separate setup that allows swapping out parts independently. In such a setup the reflector is known as a Raylite reflector, and is usually combined with bi-pin quartz halogen lamps such as the 500 watt A1/244. Lens are optional in these setups; an aperture[a] is usually used instead to make the beam more visible when used with smoke or fog effect.

The sealed beam lamp produces an intense oval pool of light with unfocused edges. The only focus adjustment is a knob that allows the lamp/lens unit to be rotated within its casing, thus changing the orientation of the oval. With some models this control is via the mogul ceramic connector which connects directly to the Mogul prongs of the lamp. With the SourceFour PAR, the interchangeable lens is what is rotated. Therefore, the diameter of the light spot is defined by the aluminium reflector, and cannot be adjusted without changing the lamp. The type of lamp includes extra-wide flood (XWFL), wide flood (WFL), medium flood (MFL), narrow spot (NSP), and very narrow spot (VNSP).[1]

These types of instruments come in varying diameters, the most common being designated PAR56 and PAR64. The number indicates the diameter of the housing in eighths of an inch (so a PAR64 is eight inches (~20 cm) in diameter).

In the United States of America, sealed-beam headlights were introduced in 1939, becoming mandatory starting the following year, for almost four and a half decades, until the 1984 model year.

Cars prior to, and after these years could have a variety of shapes of headlamps, using any of a wide variety of replaceable light bulbs. Between 1940 and 1956, all U.S. cars had to have two 7-inch (178 mm) round headlights. Each headlight had dual filaments, so that a single bulb could provide both high- and low-beam light. In 1957, a system of four sealed-beam headlights – two per side, of 5 3/4 inches (146 mm) diameter, was allowed in some U.S. states. The following year in 1958, all states allowed the new system. Two of the lamps contained two filaments and served as low and high beam, while the other two lamps contained only one filament and were active only during high-beam operation.

With only two round sizes and two rectangular sizes allowed, the sealed-beam headlamp mandate greatly restricted styling possibilities for automobiles.[2]

Aircraft landing (ACL) lights are often sealed beams that have a very narrow beam spread. They typically have a size of PAR36 or PAR46, and run on 28 V DC.[3] They have found some use in stage lighting as well.

PAR lamps and their fixtures are widely used in theatre, concerts and motion picture production when a substantial amount of flat lighting is required for a scene. They are often mounted in can-shaped fixtures known as PARCANs, which can be used to generate colours by fitting them with colored sheets called gels. The cans are arranged into rows of different colours and identical rows placed on different sides of the stage; such assemblies made from aluminum bars are known as PARbars.[b] Due to their affordability, they are ideal for colour washes in several different colours. However, because of the lack of dynamic control over the beam diameter, shape and sharpness, PARs are rarely used as Front of House lights other than for front washes but can be used for special effect lighting such as lighting from directly above or from extreme angles as well as general wash lights overhead/above stage. If used cleverly, par cans can provide low budget productions with good effects.

PAR64 sealed beam lamps are often used for these purposes; they are typically available with 250, 500 or 1000 watt power ratings. Beam spreads are designated as FL (flood), SP (spot), NSP (narrow spot), and VNSP (very narrow spot), as stamped on the back of the lamp's reflector.

In situations where sunlight or other specular light is available, a white foam reflector is often used to accomplish the same effect as a PAR array. PAR cans are being replaced in some stage applications by LED stage lighting, which use less electric power and produce a wide array of saturated colors without the use of color filters, when white light is not needed.

Smaller sealed beam PAR lamps (≤ PAR 38) with an Edison screw base is common in indoor lighting. They can be found in recessed fixtures mounted on the ceiling or on tracks.

Sealed beam lamp arrays are also in use by modern lighthouses.[4]

Note: PAR16 cans are also known as "birdies" in theatre, as it is "below par", an oblique reference to a term used in the game of golf[citation needed].

Depending on the parabolic reflector geometry and placement of the filament within the paraboloid, PAR lamps can achieve a wide range of beam widths, from narrow spot to wide flood. For lighting effects even wider than wide flood can provide, supplemental reflectors or lenses can be used. The following suffixes are commonly used with PAR lamps to indicate their beam width:[5]

The suffixes given are for 1000-Watt PAR64 lamps only. The focused beam can be oval and is sometimes specified in two numbers.[5]

Narrow, medium and wide Raylite reflectors are quite readily available.

Each lamp type is available in 220–240 V and 100–120 V variants, depending on the common mains voltage for the locale. In Europe, where the mains voltage is between 220 and 240 V, it is common to use series pairs of 110 V lamps because the thicker filament is much less liable to vibration-induced fracture; an important consideration for touring rigs and music venues.

ACL (Aircraft Landing) PARs, which nominally run on 28 V, can be adapted to mains power on stage by arranging them into a series of four or eight lamps, usually consisting of one or two four-bars.

High-power, mains-voltage, theatrical PARs usually use the bi-pin GX16d "Mogul" lamp connector;[6] G9.5 and variants are common too. Theater metal-halide lamps use G12. In addition to being used on light bulbs themselves, the G38 connectors are also found as a part of the Raylite reflector assembly, although some Raylite reflectors have "tails" which then require connection to the mains flex with the use of a ceramic connector block (ideally fixed to the can's body).[7]

In residential and office use, the usual connector for the lamp's voltage is often used. This includes Edison screw or a bayonet connector for mains-supplied PARs, or small bi-pin connectors for low voltage applications.

A PAR16 lamp with E27 screw for indoor retrofitting.

LED retrofit equipment that match PAR lamp dimensions is made by some manufacturers. As with the case of LED MR lamps, LED PAR lamps generally use an array of individual LED elements that are unsuitable for reflector operation. Nevertheless, some degree of beam control can be obtained with aperture or lens, and LED PAR 38 replacements with a 40° spread is common.

Models built for stage lighting may use less similar dimensions. They often use a RGB color model for color-tuning abilities, though some higher-end fixtures use a 5-primary colour system instead.[8]

Intelligent, moving PARs allow for the ability to pan and tilt the instruments through a lighting control console. These have been generally superseded by dedicated intelligent lighting fixtures, which use a different light source and offer more control over the colour and shape of the beam.