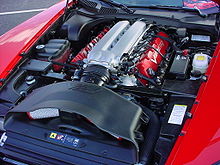 A V10 engine is an ten-cylinder piston engine where the cylinders are arranged in a V configuration around a common crankshaft.

V10 engines are much less common than V8 and V12 engines. Several V10 diesel engines have been produced since 1965, and V10 petrol engines for road cars were first produced in 1991 with the release of the Dodge Viper.

The V10 configuration does not have perfect engine balance, since an unbalanced rocking couple is caused by each cylinder bank functioning as a straight-five engine. Therefore, balance shafts are sometimes used to reduce the vibrations in a V10 engine.[1]

One of the first known V10 engines was used in the 1936 Busch-Sulzer ICRR 9201 prototype locomotive, of which three examples were produced in the United States.[2]

The Volkswagen V10 TDI is a turbocharged V10 engine which was produced from 2002–2010 for use in the Volkswagen Phaeton luxury sedan and Volkswagen Toureg SUV. 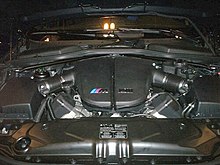 V10 engines are less common than V8 and V12 engines, however they have been used in several luxury cars, sports cars and commercial vehicles. An early V10 petrol engine was used in the 1987 Lamborghini P140, however this prototype sports car did not reach production.[5]

One of the first known V10 engines designed for motor racing was a 3.5 L (214 cu in) prototype Formula One engine built by Alfa Romeo in 1986.[11] Originally intended for the Ligier Formula One team, this partnership collapsed without the engine being used in any races. Alfa Romeo fitted the engine to two Alfa Romeo 164 Pro Car prototypes in 1998, however these cars also did not compete in any races.[11]

The most widespread use of V10 engines has been in Formula One racing. Following a ban on turbocharged engines after 1988, the first V10 Formula One cars were the 1989 McLaren MP4/5 and Williams FW12. By 1996, V10 engines were used by the majority of teams by the 1996 season, following reduction in displacement from 3.5 to 3.0 L (214 to 183 cu in). The V10 seem the best compromise between the lower weight of a V8 and the higher power of a V12. Renault F1 used a flatter 110° angle in 2002 and 2003, but reverted to a more conventional 72° following the change in rules which dictated that an engine must last two race weekends. In a further change to the rules, V10s were banned for the 2006 season onwards in favor of 2.4 liter V8s.

In sports car racing, the first V10 engine was used by the Peugeot 905 in the two final races of the 1990 season. This was followed by the Judd GV10 engine being used by several teams during the 1991 season and the Toyota TS010 that debuted in the last race of the season. The Audi R15 TDI was a Le Mans Prototype (LMP) racing car that used a turbocharged diesel V10 engine and competed in various endurance races in 2009 and 2010. In 2010, the Audi R15 TDI set the current distance record for the 24 Hours of Le Mans race.[citation needed]