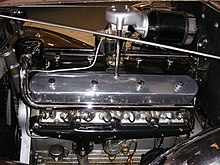 A V16 engine is a sixteen-cylinder piston engine where two banks of eight cylinders are arranged in a V configuration around a common crankshaft. V16 engines are less common than engines with fewer cylinders, such as V8 and V12 engines.

The first use of a V16 engine was in the 1910 Antoinette VII experimental aircraft, followed by several cars in the 1930s. Today, the most common applications for V16 engines are railroad locomotives, marine craft, and stationary power generators. 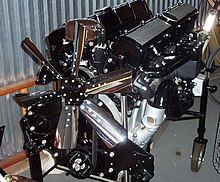 The first production car to use a V16 engine was the Cadillac V-16, introduced in January 1930. The Cadillac V16 engine was initially produced with a displacement of 452 cu in (7.4 L), OHV and a V-angle of 45 degrees. For the 1938 Series 90, the engine was revised to a displacement of 431 cu in (7,062.8 cm3), a flathead valvetrain and a V-angle of 135 degrees (the latter in order to achieve a lower cowl height). This 431 cuin version produced as much power as its immediate predecessor while being far less complex, had a stiffer crankshaft which aided durability and smoothness, and even had an external oil filter, a rarity for any car at any price in those days.

The Marmon Motor Car Company actually began development of a V16 engine in 1927 (earlier than Cadillac), however its development program took longer and the Marmon Sixteen was released in 1931. This engine had a V-angle of 45 degrees, used pressed steel cylinder liners and was constructed mostly of aluminium. Only 400 Marmon Sixteens were produced between 1931 and 1933.

In 1991, the Cizeta-Moroder V16T began production, featuring a 16-cylinder engine in a unique configuration. Rather than a conventional V16 layout, the engine was actually two separate transversely mounted V8 engines with gearing between the two providing a single output from the centre of the engine assembly to the transmission. Only a few cars were produced before the company ceased operations.

The Peerless Motor Company developed a V16 engine in the early 1930s, however just a single prototype was built before all automobile production ceased and the company converted its factory into a brewery following the end of Prohibition in the United States.[1]

At the 1931 Indianapolis 500, a custom-built V16 engine was fitted to a Cord "supercar" driven by Shorty Cantlon. The car was competitive, charging from 26th on the grid to 3rd, but was slowed by unreliability, further exacerbated by having to change all sixteen spark plugs. The following year, Bryan Saulpaugh qualified the car in third position, however the car suffered a broken oil line on lap 55 and their race was over. Shortly after the race the V16 was removed and replaced with a conventional Miller four-cylinder engine.[7]

The only known use of a V16 engine in the post-World War II era is the British Racing Motors (BRM) V16 engine used in Formula One racing from 1950 to 1955. The engine was a 1.5 L (91 cu in) supercharged design, which was unsuccessful despite its high power output. Officially, it produced 410 kW (550 hp) but probably delivered around 450 kW (600 hp).[9] The car was difficult to drive, due to the power band being in a narrow range and at high RPM. 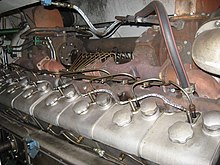 The V16 configuration is also used in several large displacement diesel engines that are used as marine engines or in rail locomotives. This is due to manufacturers often designing an engine around a fixed displacement per cylinder, then adding additional cylinders to the design until the required power output is achieved. For example, the Electro-Motive Diesel 710 engine range uses a displacement of 710 cu in (11.6 L) per cylinder, with the 16 cylinder version (called the EMD 16-710) producing over 4,300 hp (3.2 MW). 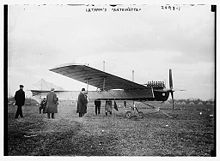 The 1910 version of the Antoinette VII was powered by a V16 engine and competed in the 1910 Gordon Bennett Cup in the United States.[11]

In the first half of the 20th century, several prototype aircraft used V16 engines, including: