Artificial leather, also called synthetic leather, is a material intended to substitute for leather in upholstery, clothing, footwear, and other uses where a leather-like finish is desired but the actual material is cost-prohibitive or unsuitable. Artificial leather is marketed under many names, including "leatherette", "faux leather", "vegan leather", "PU leather" and "pleather".[1] 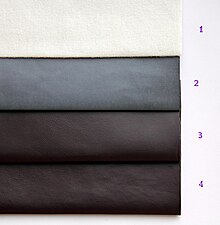 Steps to make synthetic polyurethane leather:
1) The base fabric
2) A polyurethane coating is applied
3) A color coat is added
4) A textured finish is added[2]

Many different methods for the manufacture of imitation leathers have been developed.

One of the earliest was Presstoff. Invented in 19th century Germany, it is made of specially layered and treated paper pulp. It gained its widest use in Germany during the Second World War in place of leather, which under wartime conditions was rationed. Presstoff could be used in almost every application normally filled by leather, excepting items like footwear that were repeatedly subjected to flex wear or moisture. Under these conditions Presstoff tends to delaminate and lose cohesion.

Another early example was Rexine, a leathercloth fabric produced in the United Kingdom by Rexine Ltd of Hyde, near Manchester, England. It was made of cloth surfaced with a mixture of nitrocellulose, camphor oil, alcohol, and pigment, embossed to look like leather. It was used as a bookbinding material and upholstery covering, especially for the interiors of motor vehicles and the interiors of railway carriages produced by British manufacturers beginning in the 1920s, its cost being around a quarter that of leather.[3]

Poromerics are made from a plastic coating (usually a polyurethane) on a fibrous base layer (typically a polyester). The term poromeric was coined by DuPont as a derivative of the terms porous and polymeric. The first poromeric material was DuPont's Corfam, introduced in 1963 at the Chicago Shoe Show. Corfam was the centerpiece of the DuPont pavilion at the 1964 New York World's Fair in New York City. After spending millions of dollars marketing the product to shoe manufacturers, DuPont withdrew Corfam from the market in 1971 and sold the rights to a company in Poland.

Leatherette is also made by covering a fabric base with a plastic. The fabric can be made of natural or synthetic fiber which is then covered with a soft polyvinyl chloride (PVC) layer. Leatherette is used in bookbinding and was common on the casings of 20th century cameras.

Cork leather is a natural-fiber alternative made from the bark of cork oak trees that has been compressed, similar to Presstoff.[4]

A fermentation method of making collagen, the main chemical in real leather, is under development.[5]

The production of the PVC used in the production of many artificial leathers requires a plasticizer called a phthalate to make it flexible and soft. PVC requires petroleum and large amounts of energy thus making it reliant on fossil fuels. During the production process carcinogenic byproducts, dioxins, are produced which are toxic to humans and animals.[6] Dioxins remain in the environment long after PVC is manufactured. When PVC ends up in a landfill it does not decompose like genuine leather and can release dangerous chemicals into the water and soil.

Polyurethane is currently more popular for use than PVC.[7]

Artificial leathers are often used in clothing fabrics, furniture upholstery, and automotive uses.[8] One disadvantage of plastic-coated artificial leather is that it is not porous and does not allow air to pass through; thus, sweat can accumulate if it is used for clothing, car seat coverings, etc. One of its primary advantages, especially in cars, is that it requires little maintenance in comparison to leather, and does not crack or fade easily.[8] 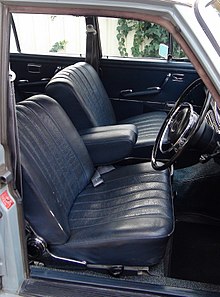