A notchback is a category of car characterized as having a three-box design where the trunk (boot) volume is less pronounced than the engine and passenger compartments.

Many models of sedans, coupés or hatchbacks could be classified as notchbacks, however the category has limited salience outside of American car manufacturers distinguishing the three-box models from other body styles in the same model range. For example, the Chevrolet Vega range included both a notchback coupe and a fastback coupe. 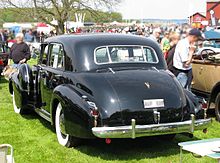 In 1952, a notchback version of the Nash Ambassador was introduced.[4]

In 1971, Chevrolet marketed the three-box sedan models of the Chevrolet Vega as a notchback in order to differentiate them from the fastback Vega models.[5][6] For the 1973 model year, the car's name was changed to "Vega Notchback".[7]

While many car models have notchback characteristics, the category is largely unused outside of North America, with their body style being described using other terms. For example, a three-box sedan[8] is more generally known as a "saloon" in British English.[9] "Notchback" has appeared in a few British English publications, however it is not a term that is used in common parlance in Britain.[10][11]