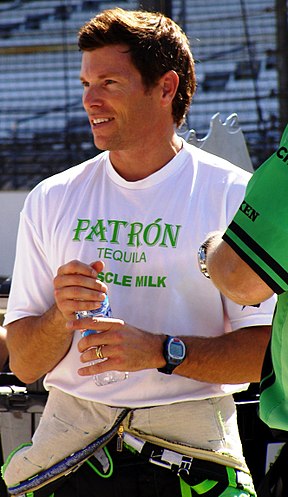 Buzz Calkins won his first Drivers' Championship while Scott Sharp became co-champion in the championship despite Calkins having one victory.

The 1996 Indy Racing League was the first season in the history of the series, which was created and announced on March 11, 1994 by the Indianapolis Motor Speedway, as a supplementary Indy-car series to the established Indy Car World Series sanctioned by Championship Auto Racing Teams (CART) since 1979. It consisted of only three races, as the season concluded with the 80th Indianapolis 500 in May. Walt Disney World Speedway was completed in time to host the first ever event of the Indy Racing League (IRL), and Phoenix International Raceway switched alliances from CART to the IRL, in order to host the second event of the season. At the conclusion of the three-race schedule, Scott Sharp and Buzz Calkins ended up tied for first place in the season championship. With no tiebreaker rule in place, the two drivers were declared co-champions. Its creation, and the opposition of Indy Car's teams and drivers to take part in it, marked the start of 'the Split', a 12-year period of competition between rival series at the top level of American Open Wheel racing that had lasting negative effects in the sport.

The series was the initiative of IMS president Tony George, who had left the CART Board of Directors in January 1994 after discrepancies over the direction of Indy car racing, and its potential effect on the Indianapolis 500. The new championship would feature the marquee race, effectively removing it from the Indy Car schedule, and was to be sanctioned by the United States Auto Club, racing exclusively on oval tracks as a response to its perceived decline in recent Indy Car seasons. The Indy Racing League name was revealed on July 8, 1994, and its first set of rules was published later that year, but it encountered criticism and resistance from the established team owners that formed CART and its drivers, who derided the concept as a 'power grab' attempt from George.

On January 23, 1995, the IRL announced that the Indy 200 at Walt Disney World Speedway would host the first event of the series on January 27, 1996, on a new temporary oval track at the Magic Kingdom at Walt Disney World Resort in Orlando, Florida. On April 3, the IRL announced that Phoenix International Raceway and the then-under construction Las Vegas Motor Speedway would be on the 1996 schedule, its dates being finalized 10 days later. On May 30, 1995, New Hampshire Motor Speedway also switched alliances from CART to IRL, completing the five races that would be held in 1996. Initially, IRL officials hoped that competitors from the rival CART series would choose to race in some or all of the IRL events, since there were no foreseen conflicts in their respective schedules.

Talks between both series in early 1995 resulted in the former delaying its new rules for 1997, instead adopting frozen regulations with 1995-and-older CART chassis with a fixed limit on how much a team could spend on its combination. However, CART would later adopt a lower-downforce philosophy for their new 1996 chassis that was similar to the delayed IRL rules (except for the initially planned engine downsizing), and announced a 1996 schedule that had multiple conflicts with the previously announced IRL dates. The race at Road America was scheduled for the same day as the IRL event at Loudon, while the races at Rio and Australia were bookended around the IRL race at Phoenix, creating an impossible travel situation.

In a controversial move, on July 3, 1995, it was announced that the top 25 drivers in IRL points would secure guaranteed starting positions for the 1996 Indianapolis 500. The '25/8 rule', intended to encourage participation at Orlando and Phoenix, left only eight positions open for at-large competitors, which was interpreted by most Indy Car teams as a de facto 'lock out' for its 26-car field.[1] As a result, CART would later schedule a second 500-mile race at Michigan International Speedway in direct competition with the Indianapolis 500, and established that teams would be stripped of their voting rights in the Board of Directors if they competed in an IRL event. Therefore, almost all of Indy Car established drivers and teams stayed away from the upstart series, with Galles and Walker fielding additional cars at the Indy 500 without its regular drivers, in deference to their sponsors.

The IRL, nonetheless, had its sights on becoming a low-cost alternative for American drivers over the influx of foreign drivers attracted by Indy Car's increasing road racing focus, and for short-track open-wheel stars that had found the sport too expensive to compete in previous seasons, or had searched for a more viable option in stock-car racing. Only 11 of the 33 starters from the 1995 Indianapolis 500 were featured in the 1996 event, which had one Indy 500 champion (Arie Luyendyk), two former race winners, and only two full-time teams and drivers from the 1995 season. The rest of the IRL field was composed of new entrants, part-time drivers and a large contingent of rookies, which amounted for half of the starters (17 out of 33) at the Indianapolis 500, while leading detractors and most of the media to describe the event as a 'watered-down' affair.

On August 28, 1995, it was announced that the inaugural 1996 season would end at the Indianapolis 500, the plan being to spread subsequent seasons over two calendar years and award the IRL championships at the conclusion of every Indy 500. As a result, the announced races at New Hampshire and Las Vegas would in fact open the 1996–97 season in late summer. This scheduling format went against the traditional motorsports grain, and the idea was eventually scrapped in October 1996, with the 1996–97 season being expanded in order to bring the schedule back in sync with the rest of the motorsports world for 1998.

The IRL points system was to be staggered to adjust for the number of races each driver entered. The number of points awarded per race would be multiplied by the number of events the driver had participated in. If a driver entered all three events, the points awarded for that third race were multiplied by three. Despite the short season, only fifteen drivers competed in all three events, but all of them had a decent number of entrants due to the pool of older chassis made available by some of the teams with previous Indy 500 experience, as well as spare machinery being acquired from some CART teams. Ford Cosworth supplied most of the field with its V8 engines, with the rest relying on stock-block V6 units, either Buick or Menard-branded.

All races were run on Oval/Speedway. ABC Sports televised all three races. IMS Radio Network was the broadcaster for all races on the radio.

Note: † Scott Brayton, 37, won the pole for the 1996 Indianapolis 500, but was killed in a crash during practice after qualifying.