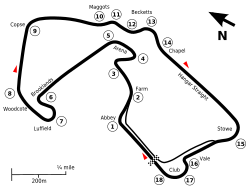 The 2017 6 Hours of Silverstone was an endurance sports car racing event held at the Silverstone Circuit in Northamptonshire, England on 14–16 April 2017. Silverstone served as the opening round of the 2017 FIA World Endurance Championship, and was the sixth running of the event as part of the championship. The event was won by the #8 Toyota Gazoo Racing TS050 Hybrid

The minimum number of laps for classification (70% of the overall winning car's race distance) was 138 laps. Class winners in bold.[2]