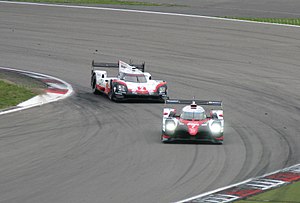 The 2017 FIA World Endurance Championship was the sixth season of the FIA World Endurance Championship, an auto racing series co-organised by the Fédération Internationale de l'Automobile (FIA) and the Automobile Club de l'Ouest (ACO). The series is open to Le Mans Prototypes and grand tourer-style racing cars divided into four categories. The season began at the Silverstone Circuit in April and will end at the Bahrain International Circuit in November, and include the 85th running of the 24 Hours of Le Mans. World championship titles will be awarded to the leading prototype drivers and manufacturers, while for the first time in the World Endurance Championship the leading grand touring drivers and manufacturers will also be awarded a world championship.

The ACO announced a provisional calendar on 22 September 2016, largely identical to the 2016 schedule. For the upcoming season, the 6 Hours of Nürburgring event is moved one week earlier in the year, in order to avoid a potential clash with the German Grand Prix. At the same time, for the first time in the history of the WEC, the official pre-season test will not be held at Circuit Paul Ricard in France, and will instead be held at the Autodromo Nazionale Monza in Italy.[1]

On 26 October 2016, Audi Sport Team Joest announced its withdrawal from the World Endurance Championship (WEC) at the end of the season. [2]

In accordance with the new Le Mans Prototype LMP2 regulations for 2017, all cars utilise the Gibson GK428 4.2 L V8 engine.

As part of the ACO's 2017 regulations, the LMP2 category has been revamped with the introduction of a single specification motor from Gibson Technology, with increased power output compared to 2016 LMP2s.[48] Cockpit and chassis designs will also mimic the LMP1 regulations for safety.[49] The four approved chassis manufacturers were Dallara, Ligier, Oreca and Riley.[50] Due to the single engine manufacturer, LMP2 teams are allowed an unlimited number of engines during the season.

At the behest of the manufacturers in LMGTE, the World Motor Sport Council approved the promotion of the GT Manufacturers' and Drivers' World Cups to world championship status, on par with the Manufacturers' and Drivers' World Championships for the LMP categories.[51] LMGTE teams will also be limited to only three tyre compounds over the season, although the third compound does not have to be chosen until Le Mans.[52] However, teams in LMGTE Pro as well as LMP1, will be limited to four sets of tyres plus two spares at all six-hour races. LMGTE entries will also no longer incur a penalty for changing an engine between qualifying and the race.[51]

Across all categories, limitations on testing have been decreased in an attempt to lower costs. Wind tunnel testing has also been further restricted.[51]

Endurance Trophy for LMGTE Am Drivers

An FIA Endurance Trophy is awarded in the LMP2, LMGTE Pro, and LMGTE Am categories. A trophy for the private LMP1 teams is not awarded in 2017 due to not meeting the minimum number of entrants.