The E89 Z4 was the first Z Series model to use a retractable hardtop roof, which meant that there were no longer separate roadster and coupé versions of the car.[1] There was no Z4 M model for the E89 generation.[2]

A total of €130 million was spent from 2007 to 2009 in expansion of the Regensburg plant for production of the Z4 (E89).[14] Although its predecessor was produced in the Spartanburg plant in the United States, the E89 was produced in the BMW's Regensburg plant alongside the E93 3 Series convertible making it the third Z series car to be manufactured in Germany since the Z1 and Z8.[15][16]

The E89 Z4 came standard with BMW EfficientDynamics technologies,[25] such as regenerative braking[26] and electric power steering.[27] Models also feature an electric parking brake,[28] engine start-stop system, directional headlights,[29] and a driving mode selector with Comfort, Sport, and Sport+ modes which adjust throttle and gearbox behaviour, power steering weighting, and the adjustable dampers (with the optional 'Electronic Damper Control').[30][31] The models could also be ordered with the iDrive infotainment system with BMWConnected services and keyless entry.[32]

No diesel or all-wheel drive (xDrive) models were offered for the E89 Z4.

The Z4 sDrive35is is not available with a 6 speed manual. It was only available with a 7-speed dual-clutch transmission (DCT) in the M Sport trim,[39] and uses an upgraded version of the N54 engine shared with the 1 Series M Coupé. The engine has a computer-controlled overboost function for 3rd to 7th gears. The boost function activates after each gear change with full throttle, and lasts for 7 seconds between 1,500 and 4,500rpm.[40] Peak torque during overboost is 500 N⋅m (369 lb⋅ft), compared to 450 N⋅m (332 lb⋅ft) without overboost.[41] 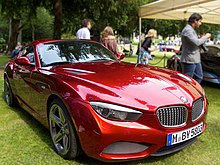 The Zagato Coupé was a concept car based on the Z4 (E89) developed in collaboration with Italian design house Zagato. It was unveiled at the Concorso d'Eleganza Villa d'Este on 25 May 2012. As the then BMW chief designer Adrian van Hooydonk and Zagato chief designer Norihiko Harada were friends, the decision was quickly made when Andrea Zagato proposed a collaboration with BMW.[42] The body of the Zagato Coupé was built entirely by hand and includes a double-bubble roof[43] and Rosso Vivace paint which changes colour depending on the lighting, ranging from a near black to a bright red. The Zagato Coupé also incorporates the letter "z" in its design, with the kidney grille composed of small matte "z" letters,[44] with "z" letters embroidered into the seats.[45] 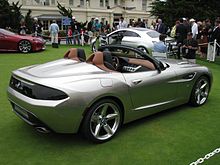 The Zagato Roadster was the roadster version of the Zagato Coupé that was unveiled three months earlier, and was introduced at the Pebble Beach Concours d'Elegance on 19 August 2012. The Zagato Roadster was manufactured in six weeks, from the first design idea to the finished model.[46] Similar to the Zagato Coupé, the paint work of the Roadster changes appearance according to the lighting, ranging from dark grey to a light silver. The roadster does away with the retractable hard-top of the Z4 and incorporated a tonneau cover for protection of the interior which incorporates a double-bubble shape.[47] The Zagato roadster has a black interior, with a strip of brown leather trim extending to the roll-over hoops.[48]

The Z4 facelift (also known as LCI) models were introduced in March 2013. Major changes were:

Yearly production volumes for the Z4 (E89) are as follows: 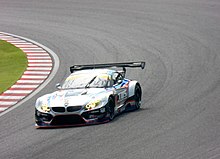 In its 2010 debut season, the Z4 GT3 won the Dubai 24 Hour GT3 endurance event and finished second at the 2011 24 Hours of Spa-Francorchamps event by the Need For Speed Team Schubert.[61] The Z4 GT3 achieved several victories in the FIA GT3 Championship and Blancpain Endurance Series.[62]