The Best In The Desert (BITD) Racing Association is an American desert off-road racing association, based out of Las Vegas, Nevada. It was founded by Casey Folks,[1] and is currently owned by his sons Daryl and Bryan Folks. BITD runs the Vegas To Reno, the longest off-road race in the United States.

Events are nationally televised on MavTV, its website, and the America One Sports Network.[3] 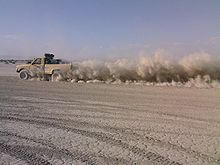 Best In The Desert has classes of Trick Trucks (aka Trophy Truck), buggies, motorcycles, Quads.[2][4] Various events have different classes of racing vehicles.