He was McLaren Autosport BRDC Young Driver of the Year in 1996. He is a former test driver for the McLaren Formula One team, but has raced primarily in touring cars and sportscars since 2000. He spent 2 years in the DTM for Keke Rosberg's Mercedes-Benz-powered team, also winning several ASCAR races. In 2006 he raced sportscars for Aston Martin, but also competed five rounds of the British Touring Car Championship for SEAT, sharing their 2nd car with James Thompson. In his first drive for the team he finished 3rd.

He remained with the team for 2007, now full-time team-mate to Plato. Luck was again against him at Rockingham – after qualifying on pole the car had an electrical failure before race one. His first win came in race 11 at Croft [1], with two more at Knockhill.

Turner driving for SEAT at the Oulton Park round of the 2007 British Touring Car Championship.

As well as driving for SEAT in the BTCC, Darren also competed in the 2007 Le Mans 24 Hours, competing in the GT1 class driving for Prodrive Aston Martin Racing alongside David Brabham and Rickard Rydell. After a tense fight against the Corvette Racing Corvette C6.R of Johnny O'Connell, Jan Magnussen and Ron Fellows, the Aston prevailed to win a Le Mans class race for the first time since the return of Aston Martin to endurance sportscar racing.

He opened his 2008 racing season by competing in the Rolex 24 finishing 4th in class and overall sharing a Krohn Racing Pontiac-Riley with Niclas Jonsson and Ricardo Zonta. At the 2008 24 Hours of Le Mans Turner won the GT1 class (13th overall) driving an Aston Martin DBR9 shared with David Brabham and Antonio García.

Turner also participated in the Gold Coast 600 race as part of the 2011 International V8 Supercars Championship. He entered the race as a replacement driver to Dan Wheldon, who was scheduled to drive in the race but was killed in a 15-car crash at the IndyCar World Championship race at the Las Vegas Motor Speedway, less than a week before the race.

In the 80th edition of the 24 Hours of Le Mans in 2012, Turner and the Aston Martin Racing finished third place in the GTE-Pro class along with his co-drivers the German Stefan Mücke and the Mexican Adrián Fernández, their Aston Martin Vantage 4.5 L-V8 covered a total of 332 laps (2,811.65 miles), in the Circuit de la Sarthe without failure or serious mechanical problems. Also the team achieved the fastest lap of the category with 3 minutes and 54.928 seconds.[1][2]

Turner continued to race for Aston Martin Racing in the FIA World Endurance Championship until 2020, notching up numerous victories, the biggest of which was his third 24 Hours of Le Mans win, which came in 2017. He raced the #97 Aston Martin Vantage GTE to a class win in GTE Pro, alongside Jonny Adam and Daniel Serra. It was Turner who took the GTE pole position for the 2017 race with a time that broke the lap record.

Darren continues to race, competing in events including the Nürburgring 24 Hours.

Turner is also a regular competitor at the Goodwood Revival and in 2018 he was named "Rolex Driver of the Meeting" in recognition of his performances at the event. 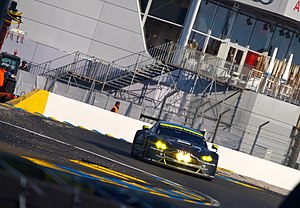 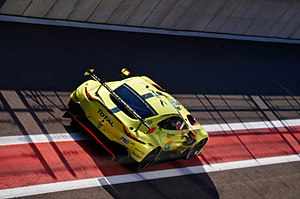 + Not eligible for points.

† As Turner was a guest driver, he was ineligible to score points.