Skip to content
Off-road vehicle
"Dune Buggy" redirects here. For the song by the Presidents of the United States of America, see Dune Buggy (song). 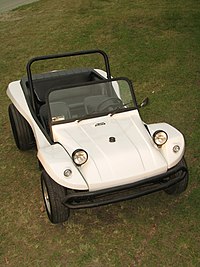 Bugre II, a Brazilian buggy made in the early 1970s 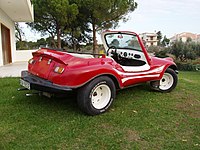 A dune buggy — also known as a beach buggy — is a recreational motor vehicle with large wheels, and wide tires, designed for use on sand dunes, beaches, off road or desert recreation.

The design is usually a topless vehicle with a rear-mounted engine. A dune buggy can be created by modifying an existing vehicle or custom-building a new vehicle.

Dune buggies are typically created by modifying an existing road vehicle,[1] while sandrails are built from the ground up as a custom vehicle.

For dune buggies built on the chassis of an existing vehicle, the Volkswagen Beetle has been most commonly used as the basis for the buggy, though conversions were made from other cars (such as the Corvair and Renault Dauphine).[2] The model is nicknamed Bug, lending partial inspiration to the term "buggy." The Beetle platform chassis was used because the rear engine layout improves traction,[3] the air-cooled engine[4][5] avoids the complexities and failure points associated with a water-cooled engine, the front suspension was considered cheap and robust[6] and the spare parts — and donor vehicles themselves — were cheap and readily available.[7] While early dune buggy conversions were left with no body, or featured custom bodies of sheet metal (such as the EMPI Sportsters and similar buggies), glass-reinforced plastic (fiberglass) bodies, developed in the 1960s, have become the standard image of the modern buggy, and come in many shapes and sizes.

The original fiberglass dune buggy was the 1964 "Meyers Manx" built by Bruce Meyers.[2] Bruce Meyers designed his fiberglass bodies as a "kit car", using the Volkswagen Beetle chassis.[3] Many other companies worldwide have been inspired by the Manx, making similar bodies and kits.[3] These types of dune buggies are known as "clones".[2] 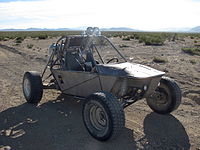 A sandrail is a lightweight vehicle similar to a dune buggy, but designed specifically for operation on open sand.

Sandrails are usually built as a spaceframe by welding steel tubes together.[8][9] The name sandrail is due to the frame "rails" present. The advantage of this method is that the fabricator can change fundamental parts of the vehicle (usually the suspension and addition of a built-in roll cage). Sandrails, as per dune buggies, often have the engine located behind the driver. Sizes can vary from a small-engine one-seat size to four-seat vehicles with eight or more cylinders.[10]

Dune buggies are recreational vehicles that are used in difficult terrain like dirt, sand gravel and it has more engine power and lighter frame to increase the power to weight ratio where as sandrails are made from existing vehicles, typically you wont find windows doors or even body panel on sand rail.

A similar, more recent generation of off-road vehicle, often similar in appearance to a sandrail, but designed for a different use, is the "off road go-kart". The difference may be little more than fitting all-terrain tires instead of sand tires and the much smaller size of the engine.

Because of the advantages a buggy can afford on some terrain, they are also used by the military.[11]

In the United Kingdom, the SAS have used cut-down, light-weight all terrain vehicles for secret special operations "behind the lines" since early in World War II.[13] A buggy was used by the British Special Air Service (SAS) forces during the Gulf War. A long-range special desert operations vehicle was developed in 1992 and nicknamed "pink panthers" because of their color,[14] but these were only modified Land Rovers.[15][16]