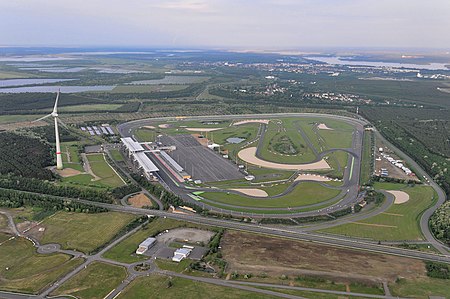 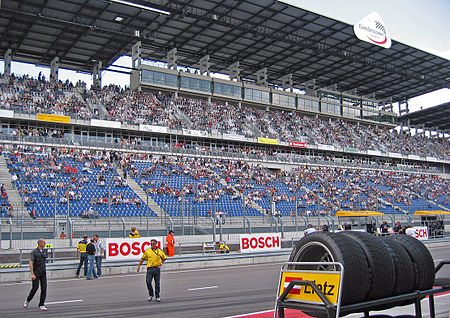 The Lausitzring (formally known as the Dekra Lausitzring for ownership reasons) is a race track located near Klettwitz (a civil parish of Schipkau, Oberspreewald-Lausitz district) in the state of Brandenburg in northeast Germany, near the borders of Poland and the Czech Republic. It was originally named Lausitzring as it is located in the region the Germans call Lausitz (Lusatia), but was renamed EuroSpeedway Lausitz for better international communication from 2000 to 2010. The EuroSpeedway has been in use for motor racing since 2000. Among other series, DTM (German Touring Car Championship) takes place there annually. It also used to host the Superbike World Championship.

Winding in the infield of the high-speed tri-oval, there is a regular road race track for automobile and motorbike racing, using various track configurations up to roughly 4.562 km (2.835 mi). The stands around the tri-oval have a capacity of 120,000, while the huge main grandstands have 25,000 seats, and unlike many circuits, the entire circuit can be seen from the main grandstand. Next to the racing facility, there is a test oval with two long straights connecting two steeply banked U-shaped corners. The test oval has a total length of 5.800 km (3.604 mi), with each of its two straights measuring about 2.5 km (1.6 mi) in length. All tracks can be connected to form an 12.030 km (7.475 mi) long endurance racing course, but so far this option has been used only for testing and never as part of a major event.

On 9 October 2005, the EuroSpeedway played host to the A1 Grand Prix series on its road course. The fastest lap of the meeting was set by Nicolas Lapierre and was 0.45 seconds slower than the lap record for the 4.345 km (2.700 mi) circuit held by Heikki Kovalainen.

The EuroSpeedway played host to Round 6 of the 2010 Red Bull Air Race World Championship. As the last two events of the 2010 Championship (Rounds 7 and 8) were cancelled, the 2011 series was cancelled as well. The series then suffered an overall three-year hiatus before finally returning in September 2016 and September 2017.[5]

The official race lap records at Lausitzring are listed as:

On 1 November 2017, Dekra acquired the Lausitzring as a test site, especially for autonomous driving.[41] In April 2019 test and verification of communication elements took place on the Lausitzring. Participants were Ford, Samsung, Vodafone, Huawei, LG Electronics and others. Topics were communication matters.[42]

Dekra organised also an Open-air festival, that took place in May 2019.[43]

Complementary racing events, such as DTM are on the agenda.[43]