Felix Rosenqvist (born 7 November 1991) is a Swedish professional racing driver who currently drives the No. 6 Chevrolet for Arrow McLaren SP in the NTT IndyCar Series.[1][2] He was named Rookie of the Year for the IndyCar Series in 2019.

In 2010 he was fifth in the German Formula Three Championship with two victories, eight podiums, and one pole position. He also attended the 2010 Macau Grand Prix Formula Three where he finished ninth after having qualified seventh in his debut with the same Swedish/British racing team Performance Racing.

For 2011, he graduated to the Formula 3 Euro Series with the Mücke Motorsport team, where he finished fifth with one win, 10 podiums, and five fastest laps, and won the Masters of Formula 3 in his rookie year.

In 2012 he finished third in the 2012 European Formula 3 Championship and finished second in Macau Grand Prix.

The year after he narrowly missed out on the 2013 European Formula 3 Championship title to Raffaele Marciello, however winning the Masters of Formula 3 for a second time from pole position. In Macau Grand Prix he started the race from the front row but collided with Raffaele Marciello and Pipo Derani to retire in the first lap.

In his fourth year with Mücke Motorsport, the Swede finished eighth in the 2014 European Formula 3 Championship in a disappointing campaign. He ended the year with a very welcomed win in the 2014 Macau Grand Prix from pole position ahead of teammate Lucas Auer

In 2015 he switched to Prema Powerteam, claiming the 2015 European Formula 3 Championship title with 13 victories, 24 podiums, and 17 pole positions. He would also take his second consecutive victory in the 2015 Macau Grand Prix, again from pole position. His extended Formula 3 career meant that he would become the most successful Formula 3 racer of all time. 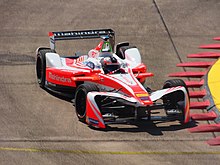 Rosenqvist driving for Mahindra Racing at the 2017 Berlin ePrix

In February 2016 he announced that he would compete in the 2016 Indy Lights series for Belardi Auto Racing[3] as he failed to bring the budget for a continued programme in GP2 Series with Prema Powerteam. Rosenqvist had a reduced programme in the series, competing in only 10 of the 18 races, as he later in the season would have clashing commitments with his sportscar programme with Mercedes-Benz in Europe. He scored 3 wins in his campaign. He had a successful test in IndyCar with Chip Ganassi Racing at Mid-Ohio Sports Car Course, saying he would be happy to return to the American racing scene later in his career.

Rosenqvist joined the 2016 Blancpain GT Series Sprint Cup together with French Tristan Vautier, driving a Mercedes-AMG GT3 for AKKA-ASP Team where they together scored 1 victory, 3 podiums out of the 10 races and finished 7th in the overall standings. The same duo together with Renger van der Zande lined up for the classic 2016 24 Hours of Spa where they reached 2nd place after all Mercedes-Benz cars have been given a 5-minute stop and go penalty.

Rosenqvist started 2016 with a role as official reserve driver, having continued his long partnership with Mercedes-Benz before being promoted to a race seat with one of the cars run by ART Grand Prix following Esteban Ocon's departure to Manor Racing in Formula One. He made an impressive debut in Moscow where he finished 10th and scored points in his first-ever race in the Deutsche Tourenwagen Masters. 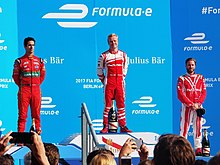 On 22 August 2016, it was announced that Rosenqvist would partner former Formula One driver Nick Heidfeld at the Mahindra Formula E team for the 2016–17 Formula E season.[4] On 10 June 2017, he won the first race at the Berlin ePrix. It would be the first victory for him, as well as for his team.[5] At the end of 2018, he made his last race start in Formula E before moving on to the Indy Car Series.

Rosenqvist is known to be a street circuit specialist having won in Grand Prix of St. Petersburg, Honda Indy Toronto, Grand Prix de Pau, Norisring and Macau Grand Prix twice, where he has started 7 times from the front row.

Rosenqvist raced in the Super Formula series for the 2017 season with Team LeMans. The same team that his manager Stefan Johansson raced with in Japanese F2 in 1981.

Rosenqvist driving for Arrow McLaren SP at the 2021 Indianapolis 500

Rosenqvist signed with Chip Ganassi Racing for the 2019 IndyCar Series. He went on to win Rookie of the Year honors after finishing sixth in the championship standings.[7] In the 2020 season, Rosenqvist won his first IndyCar race at the REV Group Grand Prix at Road America.[8]

On 13 October 2020 it was announced Rosenqvist would leave the team and join Arrow McLaren SP in 2021, replacing Oliver Askew in the organization's No. 7 entry.[9]

On 12 June 2021, at the first of the Chevrolet Detroit Grand Prix weekend doubleheader, Rosenqvist suffered a significant crash on lap 28 as his #7 Arrow McLaren car experienced a stuck throttle and as a result, his car crashed hard into the wall. He did not suffer any life-threatening injuries but was taken to a downtown Detroit hospital for further evaluation. Rosenqvist was released the following day from the hospital but was not cleared to participate in the second Detroit race nor the following round at Road America a week later. He was replaced in said races by Oliver Askew and Kevin Magnussen respectively, with Magnussen making his IndyCar debut.

He stayed with McLaren for 2022, and picked up his first podium with the team at Toronto. It was announced in September that he would also be driving for the team in 2023.[10]

† As Rosenqvist was a guest driver, he was ineligible for points.

† Driver did not finish the race but was classified as he completed more than 90% of the race distance.

† Rosenqvist did not complete sufficient laps in order to score full points.