The 408 4RM featured an innovative hydraulic four-wheel-drive system developed by Ferrari. The system, called "4RM" would later go on to be used in the Ferrari FF, introduced in 2011. 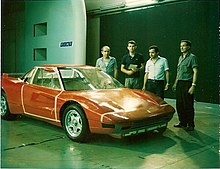 Two copies were built, based on a design by I.DE.A Institute. The first one, chassis no. 70183, was painted in red and was fitted with an all-steel welded chassis and was built in June 1987. The second one, chassis no 78610, was painted yellow and had an aluminum frame bonded with adhesives.[2] The second car was completed in September 1988 and has been exhibited at the Galleria Ferrari in Maranello.

The model name was linked to the characteristics of the engine, with the 40 in 408 standing for its 4.0 L displacement, and the 8 representing the number of cylinders. The abbreviation "4RM" stood for “4 Ruote Motrici”, meaning four-wheel drive.