The Ferrari California (Type F149) is a grand touring, high performance sports car created by the Italian automobile manufacturer Ferrari. It is a two-door 2+2 hard top convertible. When originally unveiled in 2008, the California was powered by a front-mid mounted, rear wheel drive, naturally aspirated 4.3-litre V8.[1] In 2012 a lighter, slightly more powerful variant, the California 30 was introduced. In 2014, Ferrari announced the second generation of the model, named California T powered by a new twin-turbo 3.9-litre V8.

The California represented a radical new design by Pininfarina S.p.A. and was developed under the oversight of Ken Okuyama. The model was primarily intended to attract new Ferrari owners. The car's grand touring personality was emphasized with a slightly higher ride height compared to its more aggressive siblings. The chassis was designed and manufactured by Ferrari division Carrozzeria Scaglietti. Overall, it is considered a landmark car for Ferrari in that it represents a number of concepts being used for the first time in their road cars:[1]

The Ferrari-Maserati Type F136IB engine displaces 4,297 cubic centimetres (262.2 cubic inches), and used a gasoline direct injection system produced by Bosch. It generates a maximum power output of 338 kW (460 PS; 453 hp) at 7,750 rpm; its maximum torque produced is 485 N⋅m (358 lbf⋅ft) at 5,000 rpm. The resulting 79 kW (106 hp) per litre of engine displacement is extremely high for a naturally aspirated engine, as other manufacturers have used forced induction to reach similar power levels.[6] The engine makes use of a wet sump designed lubrication system. The engine's sound - a feature that distinguishes every Ferrari - was engineered to enhance the vehicle's driving experience both with the top open and closed.

The California is equipped with an exclusive Ferrari designed F1-Trac system. The system, originally introduced on the 599 GTB Fiorano, was updated for the model. The variable power distribution to the rear wheels allows greater stability and performance in roadway turns. The result is an average increase of 20% in acceleration when exiting curves (when compared to traditional traction control systems).

The grand touring California was available with two passenger seating configurations. The first option (2+2), included two rear seats that are limited in space and arguably only capable of accommodating small child safety seats. The second option (2+), did away with the rear seats replacing them with a bench storage area. This storage area could accommodate slightly more luggage or personal effects than the seats and included matching leather luggage tie-down belts.

The California was the first Ferrari road car to offer stop/start technology. What was an option package and called the HELE system (High Emotion / Low Emission) allowed the engine to shut off while at extended idle and start again immediately upon pushing the accelerator pedal. While this technology was not always well received by many of the Ferrari Tifosi, it did allow for substantial tax savings upon sale in certain governmental jurisdictions. Later Ferrari models also offered this technology which has subsequently become common or mandatory in certain markets.

Ferrari spent over 1,000 hours in the wind tunnel with a one-third-scale model of the vehicle perfecting its aerodynamics. With the top up, the California has greatly reduced wind resistance with a drag coefficient of Cd=0.32. The California was, at the time, the most aerodynamic Ferrari road car ever made[7] until the introduction of the F12berlinetta.

The California was manufactured in a purpose built facility that was constructed adjacent to the existing factory at Maranello.[8][9] The new facility was part of Ferrari's Formula Uomo programme[10] that started in 1997 to improve production, safety and employee happiness.[2] Overall, the Ferrari production line(s) make a total of about 27 cars per day, or between 6,000 and 8,000 cars per year.

Throughout the modern California's history (2008 to 2017), only 3 cars were built with manual transmission,[14] including one order from the UK.[15] 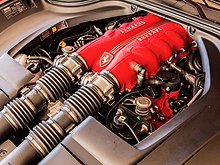 The California 30 chassis was re-engineered with structural modifications including new materials and aerospace derived construction technologies. It is the first Ferrari road car with a completely modular type chassis and was made entirely of innovative aluminum alloys. It is 30 kg (66 lb) lighter than the standard California chassis with no loss in structural capacity providing an extremely high torsional rigidity value.[19] 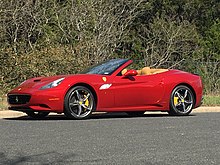 To give the clients a more dynamic driving experience, an optional HS (Handling Speciale) package was developed as part of the update in 2012 (for the US 2013 model year). It can typically be recognized by a no cost option of a silver coloured grille and silver ventilation blisters behind the front wheel wells.

The HS package includes Delphi MagneRide magnetorheological dampers controlled by the ECU with 50% faster response time utilizing a patented Ferrari software, stiffer springs for more precise body control[20] and a steering rack with a 9% quicker steering ratio (2.3 turns lock to lock as opposed to the standard rack's 2.5).[21] Overall it does away with some driving comfort trading it for reduced body roll, higher-speed cornering, and better handling during aggressive vehicle operation.

Ferrari has historically been very open to working with customers to develop specific model variants or specialized features. In late 2011, this philosophy was taken up a step with the announcement of the Tailor Made programme. In the program, interested clients work with Ferrari's personal designers in Maranello to assist in decision making throughout the entire process[22] The California 30 was one of the initial models to benefit from this service.

In May 2012, Ferrari recalled certain vehicles because the engine could freeze suddenly and possibly cause a crash. The F136 engines had crankshafts that were machined incorrectly. The auto maker learned of the problem when it happened during a review by car critics. Owners could choose from having a new engine installed by their dealer, having the engine removed and the work done by Ferrari North America or having a new crankshaft and bearings installed at the dealership.[23] The recall was for a total of 200 vehicles worldwide that were produced in 2011 and 2012. Of those 200 affected vehicles, 74 were delivered to North America. The 200 recalled vehicles were from the California and 458 Italia model ranges.[24]

The Ferrari California T (Type 149M) is an updated design of the California model featuring new sheetmetal and revised body features; a new interior, a revised chassis and a new turbocharged powertrain. It debuted in 2014 for the 2015 model year.

First unveiled on the web on February 12, 2014, subsequently, the car debuted at the Geneva Motor Show (March 6–16, 2014). The T in the moniker stands for Turbo, a technology Ferrari last used on the F40 roadcar. The car utilizes a new 3,855 cc (3.9 L; 235.2 cu in) twin-turbocharged V8 engine that produces 412 kW (560 PS; 553 hp) at 7,500 rpm and 755 N⋅m (557 lb⋅ft) at 4,750 rpm as well as a 7-speed dual clutch transmission with different gear ratios, a revised MagneRide adaptive suspension, as well as a new F1 Trac system. The car can accelerate from 0–100 km/h (0–62 mph) in 3.6 seconds and attain a top speed of 315 km/h (196 mph). The car also features a new front fascia that was influenced by the F12, a revised rear section and a revised interior. The revised rear end replaced the two sets of two vertically stacked exhaust pipes with four horizontally aligned pipes. Another improvement to the car is the reduction of emission pollution by 15% compared to its naturally aspirated predecessor. The car also utilises small turbo chargers and a variable boost management system to reduce turbo lag.

It is also the first Ferrari road car debuting the new Apple CarPlay functionality into its built-in infotainment system – Apple confirmed at the launch of the Geneva Motor Show that Ferrari, Mercedes-Benz and Volvo would be among the first car manufacturers to bring CarPlay compatible models to the market.[28][29]

The California T Handling Speciale was unveiled at the March 2016 Geneva Motor Show.[31]

Through the Tailor Made programme, the California T was produced in several special editions and could also be customised to suit individual customers. For Ferrari's 70th anniversary in 2017, this included 70 liveries inspired by the company's iconic cars of the past such as the 250 GT Berlinetta SWB and Steve McQueen's 1963 250 GT Berlinetta lusso. The California T Tailor Made liveries were unveiled at the March 2016 Geneva Motor Show and also shown at other subsequent motor shows such as the October 2016 Paris Motor Show.[31][32][33][34]

The California and California T have both been commemorated by Amalgam Collection[35] in large 1:8 scale diecast replicas. These include hard top and convertible versions. MR Collection[36] and BBR Models[37] have also produced 1:18 and 1:43 scale replicas in hard top and convertible versions, including several different liveries. These replicas are all collectible investment pieces. Mass model manufacturers like Bburago, Maisto, Looksmart and Kyosho have also produced diecast models in 1:18, 1:24, 1:43, and 1:64 scale sizes. Hot Wheels manufactured at least six different California series in 1:18 and 1:43 scales.