Vittorio Jano designed a new 60° V12 engine for sports car racing for Ferrari. This new engine, introduced in 1956, combined elements of both Colombo and Lampredi engines with new features.[1] Engine architecture was more of Lampredi school but retained smaller Colombo internal measurements. Jano moved to Ferrari along with his designs for the Lancia D50 in 1955 and went on to design not only a new V12 but also a family of the Dino V6 engines soon after.[2] Some of the technical ideas came from the Jano's Lancia V8 DOHC engine, intended for Formula One. This family of engines replaced Lampredi inline-4s known from Ferrari Monza line and went on to win many international races and titles for Ferrari.[3] The design team comprised Jano as well as Vittorio Bellentani,[4] Alberto Massimino (best known for the Maserati 250F), and Andrea Fraschetti. 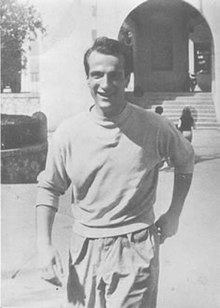 All Jano engines used dry sump lubrication and almost all of them had two spark plugs per cylinder with four coils. Also most of them had DOHC configuration with chain-driven camshafts and two valves per cylinder.[5]

Type 136 was introduced in 1957 for the Ferrari 290 S. Having same measurements as before (73 mm by 69.5 mm) and same capacity, this engine received a DOHC configuration. It was the first Ferrari sports racing car with a DOHC V12 engine,[11] nine years before Colombo V12 received a quad-cam upgrade in 275 P2.[2] Those twin camshafts per cylinder bank were inspired by the Lancia D50 Formula One car's engine, also designed by Vittorio Jano.[12] With a new configuration also the fuel system was upgraded and now the 290 S sported six Weber 42DCN carburettors. The power grew slightly to 330 PS (243 kW; 325 hp) but at higher, 8000, rpm. Compression and top speed remained the same.[7] This car was very short lived and same year, after a couple of races, upgraded to the 315 specification.[13]

The Ferrari 412 MI (MI for Monza Indianapolis) was one of only two Ferrari race cars, purpose-made for the 1958 500 Miles of Monza, a sort of Italian version of the Indianapolis 500. This single-seater used the 4.0 L engine from the 335 S. Now with a 9.9:1 compression ratio and a six Weber 42DCN carburettors, it could produce up to 447 PS (329 kW; 441 hp) at 7700 rpm. It was the most powerful of the Ferrari engines to date.[21] Luigi Musso won qualifying at a record average speed of 280.8 km/h (174.5 mph). The actual race was divided into three heats and, with an aid from Phil Hill and Mike Hawthorn, the 412 MI was able to finish third overall, just behind two purpose-built American competitors.[22]

Type 141 again found its way into a sports racing chassis.[19] This time as a result of a conversion from the 312 S in 1958. This model is usually confused with the 412 MI due to a similar name. The engine was based on the 4.0 L unit from the MI with a higher compression ratio and the same 42-type carburettors. It could produce an impressive 432 PS (318 kW; 426 hp) at 8000 rpm.[23] The car was raced in California by Phil Hill, Richie Ginther and John von Neumann (Ferrari distributor for California).[19]

Ferrari race cars sporting Jano-designed V12 engines scored many victories in Europe and internationally. In 1956, the 290 MM won the Mille Miglia,[24] brought 1-2 victory at the Sveriges Grand Prix and placed third at the 1000 km Nürburgring. In 1957, the 290 MM won the 1000 km Buenos Aires.[25] Same year the 315 S scored 1-2 victory at the Mille Miglia[26] and third place at the 1000 km Nürburgring with the highest Le Mans score of fifth place. The 335 S won 1-2 at the Gran Premio de Venezuela[27] and finished second at the Nürburgring and the Swedish Grand Prix. In the short-lived Race of Two Worlds, ran in 1957 and 1958 only, the highest place of any European entrant was achieved by the Ferrari 412 MI. The Jano V12 engines helped Ferrari achieve 1956 and 1957 World Sportscar Championships. In 1956 the 290 MM scored two out of five rounds and in 1957 three different Jano-engined models won three out of seven rounds.