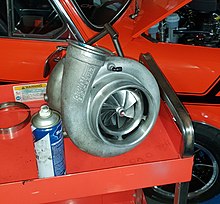 A turbocharger for a car engine 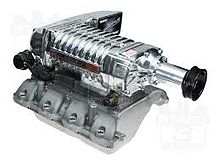 In an internal combustion engine, forced induction is where turbocharging or supercharging is used to increase the density of the intake air. Engines without forced induction are classified as naturally aspirated.[1]

Forced induction is often used to increase the power output of an engine.[2] This is achieved by compressing the intake air, to increase the mass of the air-fuel mixture present within the combustion chamber. A naturally aspirated engine is limited to a maximum intake air pressure equal to its surrounding atmosphere; however a forced induction engine produces "boost",[3] whereby the air pressure is higher than the surrounding atmosphere. Since the density of air increases with pressure, this allows a greater mass of air to enter the combustion chamber.

Theoretically, the vapour power cycle analysis of the second law of thermodynamics would suggest that increasing the mean effective pressure within the combustion chamber would also increase the engine's thermal efficiency.[4] However, considerations (such as cooling the combustion chamber, preventing engine knock and limiting NOx exhaust emissions) can mean that forced induction engines are not always more fuel efficient, particularly in the case of high-performance engines.

Four-stroke diesel engines are well suited to forced induction, since the lack of fuel in the intake air means that higher compression ratios can be used without a risk of pre-ignition. Therefore, the use of turbochargers on diesel engines is relatively commonplace.

Two-stroke diesel engines have a significantly different operating principle to two-strokes petrol engines, and require some form of forced induction - generally a supercharger - in order to function.

Intercooling is often used to reduce the temperature of the intake air after it is compressed. Another less commonly used method is water injection (or methanol injection).