Skip to content
Race car class
This article is about the third-tier of single-seater racing. For the current international championship of the same name, see FIA Formula 3 Championship. 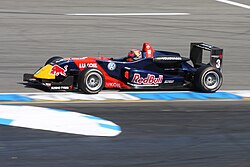 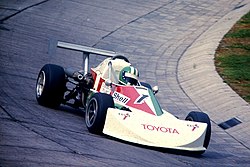 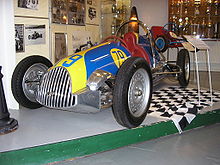 A typical early car, the Effyh 500 (1947–1952) was built in Malmö, Sweden and was one of the more successful cars. It had a lightweight tube chassis, aluminium bodywork and was powered by a 500cc 1-cylinder JAP engine.

Formula Three (adopted by the FIA in 1950) evolved from postwar auto racing, with lightweight tube-frame chassis powered by 500 cc motorcycle engines (notably Nortons and JAP speedway). The 500 cc formula originally evolved in 1946 from low-cost "special" racing organised by enthusiasts in Bristol, England, just before the Second World War; British motorsport after the war picked up slowly, partly due to petrol rationing which continued for a number of years and home-built 500 cc cars engines were intended to be accessible to the "impecunious enthusiast". The second post-war motor race in Britain was organised by the VSCC in July 1947 at RAF Gransden Lodge, 500cc cars being the only post-war class to run that day. Three of the seven entrants were non-starters, and, of the four runners, all but one retired on the first lap, leaving Eric Brandon in his Cooper Prototype (T2) trailing round to a virtual walk-over at an average speed of 55.79 mph (89.79 km/h), though his best lap (which was the fastest recorded for any 500) was 65.38 mph (105.22 km/h).[citation needed]

A one-litre Formula Three category for four-cylinder carburetted cars, with heavily tuned production engines, was reintroduced in 1964 based on the Formula Junior rules and ran to 1970. These engines (a short-stroke unit based on the Ford Anglia[1] with a special 2-valve Cosworth or Holbay OHV down-draught head, initially pioneered by Brian Hart, being by far the most efficient and popular) tended to rev very highly and were popularly known as "screamers"; F3 races tended to involve large packs of slipstreaming cars. The "screamer" years were dominated by Brabham, Lotus and Tecno, with March beginning in 1970. Early one-litre F3 chassis tended to descend from Formula Junior designs but quickly evolved.

As the likes of Lotus and Brabham faded from F3 to concentrate on Formula One, F3 constructors of the 1970s included Alpine, Lola, March, Modus, GRD, Ralt, and Ensign.

Engines in others Formula 3 series must be built from a production model block (stock block), and often must be sealed by race or series organizers, so no private tuning can be carried out. Honda engines (prepared by Mugen) have perennially been popular, as have engines produced by Volkswagen, Alfa Romeo, or Renault. Currently the HWA-tuned Mercedes and the Volkswagen engines dominate the British and European series, with Mugen, TOM'S–Toyota, Opel, and Fiat being used by some teams.