The Grand Prix of Long Beach (known as Acura Grand Prix of Long Beach since 2019 for naming rights reasons) is an IndyCar Series race held on a street circuit in downtown Long Beach, California. Christopher Pook is the founder of the event. It was the premier race on the CART/Champ Car calendar from 1996 to 2008, and the 2008 race was the final Champ Car series race prior to the formal unification and end of the open-wheel "split" between CART and IRL. Since 2009, the race has been part of the unified IndyCar Series.[1][2] The race is typically held in April. It is one of the longest continuously running events in Indy car racing and is considered one of the most prestigious events on the circuit.

The Long Beach Grand Prix is the longest running major street race held in North America. It started in 1975 as a Formula 5000 race, and became a Formula One event in 1976.[3] In an era when turbocharged engines were starting to come to prominence in Formula One, Long Beach remains one of the few circuits used from the time Renault introduced turbos in 1977 until the last Long Beach Grand Prix in 1983 that never once saw a turbo-powered car take victory.

John Watson's win for McLaren in 1983 holds the Formula One record for the lowest ever starting position for a race winner. In a grid consisting of 26 cars, Watson started 22nd in his McLaren-Ford. That same race also saw Watson's teammate (and 1982 Long Beach winner) Niki Lauda finish second after starting 23rd on the grid. René Arnoux, who finished third in his Ferrari 126C2B, was the only driver to ever finish on the Formula One podium at Long Beach driving a turbocharged car.

In 1984, the race switched from a Formula One race to a CART Indy car event. Support races over the years have included Indy Lights, IMSA, Atlantics, Pirelli World Challenge, Trans-Am Series, Formula D, Stadium Super Trucks, Formula E, and the Toyota Pro/Celebrity Race. Toyota was a sponsor of the event since its beginning and title sponsor from 1980 to 2018,[4] believed to be the longest continuously running sports sponsorship in the U.S.

Mark Smith driving in the 1993 race

The Long Beach Grand Prix was the brainchild of promoter Chris Pook, a former travel agent from England. Pook was inspired by the Monaco Grand Prix, and believed that a similar event had the potential to succeed in the Southern California area. The city of Long Beach was selected, approximately 25 miles (40 km) south of downtown Los Angeles. A waterfront circuit, near the Port of Long Beach was laid out on city streets, and despite the area at the time being mostly a depressed, industrial port city, the first event drew 30,000 fans. The inaugural race was held in September 1975 as part of the Formula 5000 series.[5][6]

In 1976, the United States Grand Prix West was created, providing two grand prix races annually in the United States for a time. Long Beach became a Formula One event for 1976 and the race was moved to March or April. Meanwhile, the United States Grand Prix East at Watkins Glen International was experiencing a noticeably steady decline. Despite gaining a reputation of being demanding and rough on equipment, Long Beach almost immediately gained prominence owing much to its pleasant weather, picturesque setting, and close proximity to Los Angeles and the glitzy Hollywood area.[5][6][7] When Watkins Glen was dropped from the Formula One calendar after 1980, the now-established Long Beach began to assume an even more prominent status.

Despite exciting races and strong attendance, the event was not financially successful as a Formula One event. The promoter was risking a meager $100,000 profit against a $6–7 million budget. Fearing that one poor running could bankrupt the event, Pook convinced city leaders to change the race to a CART series event beginning in 1984. In short time, the event grew to prominence on the Indy car circuit and has been credited with triggering a renaissance in the city of Long Beach. The race was used to market the city, and in the years since the race's inception, many dilapidated and condemned buildings have been replaced with high-rise hotels and tourist attractions.[5][6]

Due to the COVID-19 pandemic, the 2020 race was canceled as part of the City of Long Beach's ban on events with estimated attendance of more than 250.[8] The following year, as a preparatory measure for the pandemic's effects on the schedule, the race was moved from its traditional April date to September 26 as the season finale.[9] With the rise of the Delta variant there were concerns from IndyCar and the event promoters that the race would have to be canceled for 2021 or run with an attendance cap, but the promoters and the city of Long Beach were able to work out a compromise on safety measures and rapid testing to allow the event to go forward with full capacity.[10]

The Grand Prix returned to its traditional April date for the 2022 IndyCar Series.

James Hinchcliffe won his first-career Indy Lights race at Long Beach in 2010, then followed it up with an IndyCar Series win at the track in 2017. In 2005, Katherine Legge won the Atlantic Championship support race at Long Beach, her first start in the series. In doing so, she became the first female driver to win a developmental open-wheel race in North America.[11]

The current race circuit is a 1.968-mile (3.167 km) temporary road course laid out in the city streets surrounding the Long Beach Convention Center. The convention center actually doubled as the pit paddock during the days of Formula One. The circuit also goes primarily over the former location of The Pike historic amusement zone. The track is particularly noted for its last section, a sharp hairpin turn followed by a long, slightly curved front straightaway which runs the length of Shoreline Drive. The circuit is situated on the Long Beach waterfront, and is lined with palm trees (especially along the front straightaway towards the Aquarium of the Pacific), making for a scenic track. Long Beach is classified as an FIA Grade Two circuit.[12]

The circuit has undergone numerous layout changes since the race's inception in 1975. All iterations have featured a signature hairpin turn, main stretch along Shoreline Drive, and back stretch along Seaside Way. The first grand prix layout measured 2.02 miles, and featured two hairpins, one at each end of the Shoreline Drive straightaway. In its early years, the starting line and the finish line were located on different sides of the course.

In 1982, the hairpin turn and the end of the main stretch (turn 1) was removed, and replaced with a 90-degree right turn, followed by 90-degree left turn. When the race became a CART series event, the layout was changed significantly. The final turn hairpin was moved to the east, closer to the pit entrance. Other slow chicanes and turns were removed. After a minor tweak to the layout in 1987, the track was shortened in 1992 by the removal of the Park Avenue loop. That created a longer Seaside Way back stretch and a faster run to the passing zone.

In 1999, due to new construction in the area, the turn one set of curves was removed, and replaced with the new fountain complex. Turn one now became a 90-degree left turn, leading into a roundabout around a fountain, and a series of three 90-degree turns. A year later, this segment was revised again, to create a longer straightaway leading to Pine Avenue. This course layout remains intact today.

Formula 5000 and Formula One

The inaugural race was held as part of the Formula 5000 series. From 1976 to 1983 the event was a Formula One race, commonly known as the United States Grand Prix West.

The City of Long Beach and the Grand Prix Association signed a contract in 2014 to hold the Grand Prix as part of the IndyCar Series through 2018, with optional extensions available through 2020.[13] In 2016, the Long Beach City Council issued an RFP, opening up consideration for returning the event to a Formula One race as early as 2019.[14] In August 2017, after a study was completed and after discussions, the switch to Formula One was rejected. The city council voted unanimously to continue the event as part of the IndyCar Series.[15] 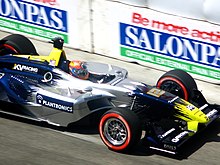 Jimmy Vasser at the 2008 Grand Prix of Long Beach.

During negotiations which led to the unification of the Champ Car World Series and the IRL IndyCar Series in 2008, a scheduling conflict arose between the IndyCar race held at Twin Ring Motegi (April 19) and the Champ Car race at Long Beach (April 20). Neither party was able to reschedule their event.

A compromise was made to create a unique "split weekend" of races at Motegi and Long Beach. The existing Indy Racing League teams would compete in Japan, while the ex-Champ Car teams raced at Long Beach. Both races paid equal points towards the 2008 IndyCar Series championship. The ex-Champ Car teams utilized the Panoz DP01 machines, the cars that would have been used in 2008 had the unification not taken place. The 2008 Long Beach Grand Prix was billed as the "final Champ Car race."

Beginning in 2005 the event included a demonstration by participants in the Formula D drifting series. Since 2006 Formula D has held the first round of their pro series on Turns 9–11 on the weekend prior to the Grand Prix. In 2013 the Motegi Super Drift Challenge, a drifting competition, was added on the GP weekend, using the same Turn 9–11 course as Formula D. The Motegi Super Drift Challenge is the only event during the GP that runs at night, under floodlights.

Long Beach hosted the opening round of the 1997 North American Touring Car Championship, being won by Neil Crompton in a Honda Accord.

A modified version of the Long Beach Grand Prix track was used during the Long Beach ePrix of the FIA Formula E Championship. The track is 2.1 km (1.3 mi) in length and features seven turns.[16][17] Admission to the first event was free: "the free admission will afford everyone the opportunity to come out and witness this historic and unique event", Jim Michaelian, president of the Grand Prix Assn. of Long Beach, said in a statement.[18][19] The ePrix was held once again in 2016. However, it was not renewed for the third Formula E season in 2017.[20] 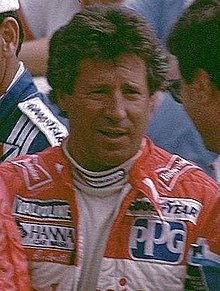 Al Unser Jr. won the Long Beach Grand Prix a record six times, including four in a row in 1988–1991, earning the nickname the "King of the Beach" 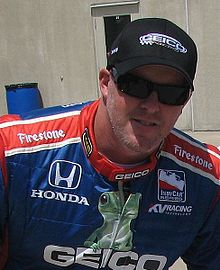 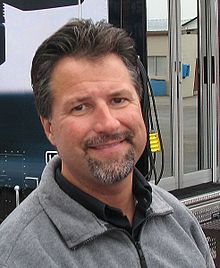 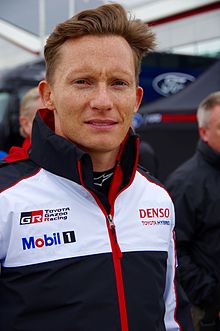 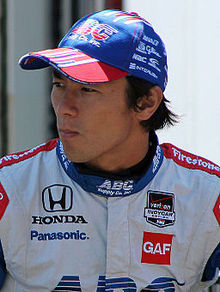 The official race lap records at the Grand Prix of Long Beach are listed as: