Las Vegas Motor Speedway, located in Clark County, Nevada in Las Vegas, Nevada about 15 miles northeast of the Las Vegas Strip, is a 1,200-acre (490 ha) complex of multiple tracks for motorsports racing. The complex is owned by Speedway Motorsports, Inc., which is headquartered in Charlotte, North Carolina. 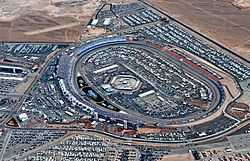 Following the final closure of Stardust International Raceway in 1971, plans were developed for a new racing facility in Las Vegas: the Las Vegas Speedrome. Located in the far northeast corner of the Las Vegas Valley, the Speedrome consisted of a road course and drag strip, opening in 1972. Alexander Rodriguez leased the facility from the City of Las Vegas, and added the 3/8-mile short track in 1985 after the closure of Craig Road Speedway in 1983. Ralph Engelstad of the Imperial Palace purchased the track in 1989, renaming the facility Las Vegas Speedway Park. Engelstad partnered with William Bennett of the Sahara Hotel and opened a new $72 million superspeedway on the site in September 1996. The first race at the speedway was on September 15 with an IndyCar event, which was won by Richie Hearn. A NASCAR Truck Series race followed in November. In December 1998, Speedway Motorsports purchased Las Vegas Motor Speedway from Engelstad and Bennett for $215 million. Veteran motorsports publicist Chris Powell was named the speedway's president and general manager and still holds that position today.

The Winston No Bull 5 Million Dollar Bonus was held at the track from 1999 to 2002. Jeff Burton won a million dollars in 2000 and Jeff Gordon won the bonus in 2001. The drag strip was relocated into the current The Strip at Las Vegas Motor Speedway, while the old drag strip and road course was rebuilt to the current outer 2.4 mile road course in use today. The 3/8-mile oval was rebuilt with a new pit lane and start-finish changed to the opposite side. During the 2004 and 2005 seasons, Champ Car also held races at the speedway, which were both won by Sébastien Bourdais.

In 2006, plans were announced to reconfigure the track after the Nextel Cup Series race held in March, increasing the banking from the original 12 degrees to 20 degrees.[2] This reconfiguration entailed "progressive banking" which increases the degree of banking on a gradient towards the outside of the track. This increased side-by-side racing. The speedway also constructed a fan zone called the "Neon Garage". This area has live entertainment, unprecedented access to the drivers and teams, such as viewing areas for fans to watch their favorite driver's car get worked on and talk to the drivers, and is home to the Winner's Circle. The speedway moved pit road 275 feet (84 m) closer to the grandstands, built a new media center and added a quarter-mile oval for Legends Cars, Bandoleros, and Thunder Roadsters, in the tri-oval area.

In late 2017, the drag strip was expanded to four lanes. Since 2018, NHRA's April meeting is held with four cars racing simultaneously.

Starting in 2018, a second race weekend was initiated at the track, taking the New Hampshire Motor Speedway's Cup Series and Truck Series fall weekend races.[5] Also, both weekends will now be triple headers (Cup, Truck, and Xfinity Series), moving the October stand alone race for the Truck Series at LVMS to the spring weekend, and moving the stand-alone Xfinity race from the Kentucky Speedway to the fall weekend. The Cup race would be the first race for the playoffs (replacing Chicagoland Speedway), The regular season finale for Xfinity Series, and the second playoff race for the Truck Series.

Because of the COVID-19 pandemic, the NHRA cancelled both races (the four and two lane meetings) and moved the NHRA World Finals, which had been held at Auto Club Raceway at Pomona, to the drag strip. (The World Finals is a different race than the NHRA fall race meeting legally.)

On October 16, 2011, the final race of the 2011 IndyCar season, the IZOD IndyCar World Championship, was held at Las Vegas. However, the race was halted by a crash on lap 11 that involved 15 cars, some of which became airborne, and some of which burst into flames. The crash began when Wade Cunningham made light contact with James Hinchcliffe, but the situation turned into a big pile-up of cars. The crash forced the red flag to be waved almost instantly, due to the remains of the damaged cars and the amount of debris on the track.[6]

Four of the 15 drivers were seriously injured and taken to the nearby University Medical Center for treatment, one of which was two-time, reigning Indianapolis 500 winner and 2005 series champion Dan Wheldon, who suffered severe blunt force trauma to the head after his car flew into the catch fence. He was pronounced dead on arrival two hours later and IndyCar's officials formally decided to abandon the race.[7] Instead of completing the race with 188 laps to go, the 19 drivers who were not involved went back out on the track and did a five-lap salute in Wheldon's honor.[8]

In December 2011, IndyCar announced that they would not return to Las Vegas Motor Speedway and that the future of IndyCar depended on what they would learn from the ongoing investigation of the crash that claimed Wheldon's life.[9]

The crash happened during the filming of an episode about IndyCar for the TV documentary series Nerve Center. The crash was shown in the episode.[10]

The official race lap records at Las Vegas Motor Speedway are listed as: