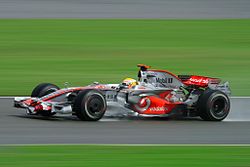 Motorsport is a popular sport in the United Kingdom. The United Kingdom is a key player in the world of motorsport, hosting rounds of the Formula One World Championship, World Rally Championship and Grand Prix motorcycle racing, amongst others. It is also the home of many of the current teams in Formula One, such as McLaren, Williams and Aston Martin, while teams such as Red Bull Racing, Mercedes, Alpine and Haas are also based in England. There are also a range of popular national series held such as the British Touring Car Championship. The Motor Sports Association is the official governing body of motorsport in the United Kingdom.

The United Kingdom has been a major player in the Formula One World Championship since it began in 1950, providing ten different world champions, winning 19 titles between them, more than any other nation. Mike Hawthorn became the first British world champion in 1958, defeating Stirling Moss, labelled by many as "the greatest driver never to have won the world championship".[1] The country won four consecutive titles between 1962 and 1965, with Graham Hill, Jim Clark (twice) and John Surtees. Hill won again in 1968, and was succeeded by Jackie Stewart, who won in 1969, 1971 and 1973. James Hunt was world champion for McLaren in 1976, and was the last British champion until 1992, when Nigel Mansell won for Williams. Damon Hill, son of Graham, was champion in 1996, while Lewis Hamilton and Jenson Button won back-to-back titles for the country in 2008 and 2009, with Hamilton becoming the first Briton to win back-to-back titles in 2014 and 2015. In 2017 Hamilton became the first Briton to win four titles. He won again in 2018, 2019 and 2020, he became a seven-time champion, equalling Michael Schumacher's record to become the statistically greatest of all time.

John McGuinness at the Isle of Man TT

Silverstone Circuit currently hosts a round of MotoGP while Donington Park hosts the Superbike World Championship. Britain's Leslie Graham won the inaugural Grand Prix Motorcycling World Championship in 1949. Geoff Duke, John Surtees and Mike Hailwood all won multiple world titles during the 1950s and 1960s. Phil Read was world champion in 1973 and 1974, while Barry Sheene won back-to-back titles in 1976 and 1977. Britain has struggled in the top 500cc/MotoGP class since then, with only Cal Crutchlow winning any races.

Speedway in the United Kingdom is also popular, with events like the Elite League, Speedway Grand Prix of Great Britain and British Speedway Championship.

In rally raiding, Sam Sunderland became the first British winner of the Dakar Rally when he won the motorcycle classification in 2017.[2]

Drag Racing has its origins in the USA during the 1920s. During prohibition the sellers of illegal alcohol, the Moonshine Boys outran the authorities by making their innocuous runabout cars fast and powerful by hiding bigger and more highly tuned engines inside - the Hot Rod was born! After the end of prohibition the Hot Rodders continued and all over America roads were being used to settle the 'mine is faster than yours argument'. Most towns had a main road running down the middle and junctions controlled by traffic lights, the Hot Rodders would race down the main drag from one set of lights to the other - the beginning of Drag Racing.

Drag Racing took off in the UK during the 1960s when, like in the USA, many of the old disused airstrips around the country were converted to drag strips.

Podington airfield, near the villages of Hinwick and Podington, was formerly a wartime airbase used by the USAAF during the Second World War. In 1966 permission was obtained to use the airfield as a drag racing complex, the ¾ of a mile main runway being used as the drag strip. The track was named Santa Pod after the Santa Ana strip in America, combined with the name of the local village of Podington.

Since then the name Santa Pod Raceway has become synonymous with the sport of Drag Racing in Europe. Today the raceway hosts events throughout the year including the FIA European Drag Racing Championships and the 'Run What You Brung' (RWYB) events where anyone with a valid driving licence can have a go and put their own vehicles and skills to the test.

A British Touring Car Championship race at Brands Hatch in 2006.

The British Touring Car Championship is the country's most popular national racing series. Its popularity was highest during the 1990s and the Supertouring era, when it attracted a range of well-known international manufacturers and drivers. Although spiralling costs meant that the series declined during the early 21st century, the series is now regaining popularity.

The United Kingdom also has a presence in the World Touring Car Championship, with Guernsey's Andy Priaulx winning three consecutive world championships between 2005 and 2007. Brands Hatch hosted the UK's WTCC round, the FIA WTCC Race of UK, until 2009. This race is now hosted by Donington Park.

Brands Hatch annually hosted a round of the prestigious German touring car series, DTM, from 2006 to 2013. This series has had a strong representation from UK drivers. The 2005 championship was won by Gary Paffett and the 2010 championship by Scotsman Paul di Resta.

British teams and drivers have enjoyed many successes at the 24 Hours of Le Mans. Britain has had more winning drivers than any other nation, including France. Jaguar and Bentley have taken 15 wins between them. Derek Bell won the race five times during the 1970s and 80s, and Allan McNish three times. Brian Redman and Moss won several World Sportscar Championship races as well.

Silverstone currently hosts the 1000 km Silverstone of the FIA World Endurance Championship, as well as rounds of the Le Mans Series and previously the FIA GT1 World Championship.

The British GT Championship is the major national sportscars series, with Britcar and many other smaller championships also running.

The British Formula Three Championship was regarded as one of the most important series below Formula One, with former champions including Nelson Piquet, Mika Häkkinen, Ayrton Senna and Emerson Fittipaldi. Due to the emergence of successful junior formulae in mainland Europe, the series does not attract the quality of drivers it once did, but is still the most important of the national Formula Three series.

The United Kingdom has a large 'club racing' scene, with a wide range of series for amateur drivers, with each containing a diverse range of drivers and cars. Clubs include the British Racing and Sports Car Club (BRSCC), British Automobile Racing Club (BARC) and Classic Sports Car Club (CSCC). Each club holds a range of meetings throughout the year, with each meeting consisting of races in several different categories.