With the revival of international sportscar racing in the mid-1990s through the BPR Global GT Series (which then morphed into the FIA GT Championship) Porsche expressed interest in returning to top-level sportscar racing and went about developing its competitor for the GT1 category. Cars in this category were previously heavily modified versions of road cars, such as the McLaren F1 and the Ferrari F40.

When the 911 GT1 was unveiled in 1996, Porsche referenced the basic structure of the SARD MC8-R that exploited the rule book at the time to the full(Frontal chassis is modified from original production car, rear chassis is racing-built structure) and the overwhelming pace compared to other GT1s stunned the sportscar racing. Rather than developing a race version of one of their road-going models, what they created was effectively a purpose-built sports-prototype. But in order to comply with regulations, a street-legal version was developed called the 911 GT1 Straßenversion - literally a road-going racing car.

In spite of its 911 moniker, the car actually only sharing the frontal chassis, front and rear headlamps with the 993 production sports car while the rear of the chassis was derived from the 962 along with its water-cooled, twin-turbocharged and intercooled, 4 valves per cylinder 3,164 cc (3.2 L) flat-six engine fuel fed by Bosch Motronic 5.2 fuel injection, which was longitudinally-mounted in a rear mid-engine, rear-wheel-drive layout, compared to the rear-engine, rear-wheel-drive layout of a conventional 911. The engine generated a power output of about 600 PS (441 kW; 592 hp). In comparison, the 993 generation 911 GT2, which was otherwise the company's highest-performance vehicle at the time, used an air-cooled engine with only two valves per cylinder.

For the 1998 season, Porsche developed an all-new car, the 911 GT1-98. Designed to match the also new Toyota GT-One and Mercedes-Benz CLK-GTR, the 911 GT1-98 featured bodywork that bore more of a resemblance to traditional sports-prototypes than the previous two models. A new sequential gearbox was installed to reduce shift time. Engine control also moved to a TAG Electronic Systems TAG 3.8 ECU. As per the regulations, a street-legal version of the 911 GT1-98 was spawned but it is believed that only one variant was produced which was still sufficient to satisfy the new regulations.

During the 1998 FIA International GT season, the 911 GT1-98 struggled to match the pace of the Mercedes, which also was improved, with the main reason being down to the air-restrictor rules which were regarded as unfavourable to the turbocharged engine (the Mercedes had a naturally aspirated V8 engine). The Michelin tyres of the factory team and especially the Pirelli of the private Zakspeed team were also considered inferior to the Bridgestone tyres of the Mercedes.

At the 1998 Le Mans, however, it was a different story. The BMW V12 LM retired with wheel bearing trouble, and the Mercedes CLK-LM cars had oil pump troubles in the new V8 engines that replaced the former V12. The Toyota GT-One, which was considered to be the fastest car, also suffered gearbox reliability problems.

Following Champion's purchase of a 911 GT1 Evo for 1999, Gunnar Racing offered a custom race car to the team with intentions to race in 2000. The car, known as the Gunnar G-99, was a custom-built 911 GT1 with an open cockpit. The chassis was made from scratch yet remained nearly identical to the 911 GT1 mechanically, even using the bulk of the body parts. A large rollbar was put over the open cockpit to help protect the driver. A 3.6-litre flat-6, from a Porsche 911 GT3, was used in place of the standard 911 GT1 unit.

However, Champion would instead turn to buy a Lola B2K/10, so the Gunnar G-99 was temporarily abandoned. The car would resurface in the Rolex Sports Car Series in 2002, yet would not be allowed to race until it had a roof again. Therefore, Gunnar Racing[5] rebuilt the car with a near-identical GT1 roof, and briefly competed in 2003. The car would take a best finish of second in class twice before being retired due to lack of funding and due to the ban on SRP cars in favour of Daytona Prototypes. 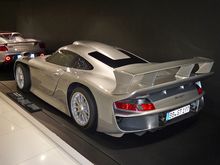 Porsche developed two prototype cars, both fully road-legal versions. The first was delivered in early 1996 to the German Federal Ministry of Transport, Building, and Urban Development for compliance testing, which it passed. The second prototype vehicle is in the hands of a Bahrain-based private car collector Khalid Abdul Rahim. These two cars feature 993 style front headlights.[7]

The production car - dubbed "911 GT1 Straßenversion" - was a run of approximately 20 units which were built in 1997 and featured 996 style front headlights. The majority of the production model was finished in Arctic Silver or Fern White, but three cars were finished in unique colours: Polar Silver, Indian Red, and Pastel Yellow.