Porsche Supercup drivers compete in identical Porsche 911 GT3 Cup cars. On average, 24 race cars take part in each race. Most circuits visited by the series are European, although circuits in Bahrain, United Arab Emirates, the United States and Mexico have been included in the calendar as well.

Since 1993 the Porsche Michelin Supercup has run as support to the FIA Formula One World Championship. The number of races has grown from the original nine to total 13 in 2006, although decreasing to 11 in 2017 and eight in 2020.

Two sets of slick tyres may be used per car each weekend. The number of wet tyres is unlimited. The tyres are identical for all competitors and are not permitted to be pre-warmed or chemically treated.

The in-race pit stop is also allowed if in case of force majeure like tyre puncture, body damage, weather conditions changing and others but in-race pit stop is not mandatory due to shorter race duration and also refuelling is not permitted during race only.

These are the racing flags that usually used in every Porsche Mobil 1 Supercup race weekends:

Porsche Supercup cars adhere to a rear-engined rear-wheel-drive design. A roll cage serves as a carbon-fibre space frame chassis and is covered by a multiple-gauge sheet metal body. They have a closed cockpit, fenders, a rear wing, and an aerodynamic splitter. Each team may purchase cars and engines from other teams.

The car has a front MacPherson strut suspension, and a rear Multi-link suspension. Brake discs must be made of steel and may not exceed 380 mm (15 in) diameter. The only aerodynamic components on the vehicles are the front splitter, rear wing, solid polycarbonate glass window in the windows only, and side skirts. The use of rear diffusers, vortex generators, canards, wheel well vents, hood vents, and undertrays are prohibited.

Porsche Supercup cars are required to have at least 1 working windshield wiper installed on the car for all tracks as a part of the road racing rules package.

For the inaugural 1993 Porsche Supercup season the 964 Cup (used in Carrera Cup from 1992) based on the 964 Carrera RS (itself based on the earlier 1990 964 Carrera Cup) was the vehicle of choice. Compared to the road car the Cup race car features a similarly stripped-out interior and retains the catalytic converter, 18 inch magnesium wheels and ABS but was lowered by 20mm, featured a full roll cage and no passenger seat.

Raced in the Porsche Supercup seasons 2002–2004. For 2002 the GT3 Cup received several changes based on the 996.2 Carrera and Turbo models, including Turbo-style headlights. The new body significantly improves aerodynamics and cooling. Engine output is increased to 280 kW (381 PS; 375 bhp) and 380 N⋅m (280 lbf⋅ft), further changes include improved transmission cooling, a lightened exhaust system and other light-weighing measures across the car.[5] For the 2004 season the car received further upgrades. Engine output is once again increased slightly, to 287 kW (390 PS; 385 bhp) at 7,200 rpm and 390 N⋅m (288 lbf⋅ft) at 6,500 rpm. Gear ratios of fourth, fifth and sixth gears have been shortened. An 89-litre fuel tank improves endurance racing capabilities. In the interior changes are made to enable the use of the HANS device.[6]

Raced in the Porsche Supercup seasons 2005–2009. The 997-based Cup car features significantly improved aerodynamics and lightweight CFRP parts, including doors, rear body panels, engine deck lid and rear wing. Parts of the suspension are adopted from the GT3 RSR.[7]

Raced in the Porsche Supercup seasons 2010–2012. Based on 997.2 GT3 RS, the car features a new 3.8 litre engine, an enlarged rear wing adopted from 911 GT3 Cup S measuring 1.70 m (67 in), additional Unibal joints on the track control arms and front and rear sword-shaped anti-roll bars with seven position settings each and a steering wheel mounted Info Display with 6 switches. The vehicle was unveiled at the 2009 Frankfurt Motor Show and deliveries began in the same year. The base MSRP of the European model was €149,850 (before tax).[8][9] 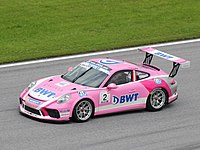 Raced in the Porsche Supercup from the 2017 season until the end of the 2020 season. Based on the latest 911 GT3 road car it features a larger 4.0-litre flat-six boxer engine, improved aerodynamics and an enlarged escape-hatch in the roof and is priced at €189,900 excluding taxes.[10]

The cockpit of all Porsche Mobil 1 Supercup cars are fully protected by doors, windshields and roofs (shielded by polycarbonate glass for windscreen, side windows and rear windows including also windshield wipers for rain weather only in the windscreen) because of current coupé-type car.

Points are assigned to the first 15 finishers of each race and all races count towards the championship. To receive points, a driver must compete in multiple races per season. Since 2008, there have been two bonus points awarded for the driver who secures pole position in qualifying.

The points of the two best drivers of each team are added up. At the end of the season Porsche rewards the three best placed teams with prize money.

In 2015, Porsche says it pays "more than 730,000 Euros in prize money to drivers and teams. In addition, the overall winner receives a special prize. The winner of the rookie classification receives an additional prize of 30,000 Euros providing he/she reregisters for the following year’s Porsche Mobil 1 Supercup."[13]

Dutch driver Patrick Huisman is the most successful driver in the championship, having won four straight titles between 1997 and 2000. Huisman's record is followed by René Rast and Michael Ammermüller with three titles and Jeroen Bleekemolen, Richard Westbrook, and Larry ten Voorde with two titles each. The reigning champion is the Luxembourgish driver Dylan Pereira.

At the Grand Prix circuits during 2006 an average of 125,000 spectators witnessed the action from the grandstands at each round. According to Porsche AG races attracted 22 million TV viewers worldwide, most of them in Europe where Eurosport provides regular coverage.[14]