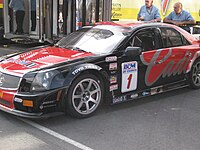 Pratt Miller Engineering, also known as Pratt & Miller, is an American company involved in the automotive and arms industries. It was founded by Gary Pratt and Jim Miller in 1989. A defense division was added in 2013 and the company was acquired by Oshkosh Corporation in 2020.[1] The company is headquartered in the unincorporated community of New Hudson, in Lyon Township, Oakland County, Michigan. They are best known as service providers for many of General Motors' motorsports programs,[2] including the operation of the Corvette Racing team.[1]

Pratt & Miller developed a road-going tuned version of the Chevrolet Corvette C6 named C6RS. The C6RS was powered by a 500 cubic inch LS-based engine developed and built by Katech Inc.

One of the company's first products was the Intrepid RM-1 GTP car, built in 1991.