The name stands for Tachi Oiwa Motor Sport, as the company was established in 1974 by Nobuhide Tachi and Kiyoshi Oiwa. Despite an oil crisis at the time, the two were able to show productive results and a healthy development of motorsports for Toyota.[5] With the support of Toyota, TOM'S went into business in 1974.[5]

In 1975 the Toyota Motor Corporation officially recognized TOM'S as an authorized tuning shop.[5] In 1978, the firm opened a garage in the Tama area of Tokyo.[5] The tuning firm expanded to Norfolk, England with branch openings in 1987.[5] TOM'S entered the Japanese Formula 3 as an engine tuner in 1981. In 1987 the company opened a British factory to produce Formula 3 engines for Europe. They also were F3 chassis manufacturers from 1991 to 1997. 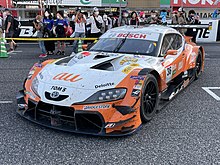 Outside of aftermarket tuning and parts, TOM'S Racing has a long history within the world of motorsport. Since its founding in 1974, TOM'S has continuously stayed involved in automotive racing, as a tuning partner, engine supplier, or racing team, especially with Toyota factory-backed racing teams.[15]

TOM'S Racing has been consistently involved in the Super GT racing series, the top level of Japanese sports car racing, since 1995 when it was called the All Japan Grand Touring Car Championship (JGTC). They have raced both Toyota and Lexus silhouette cars. TOM'S has won the GT500 Class Championship six times: in 1997, 1999, 2006, 2008, 2017, and 2021.