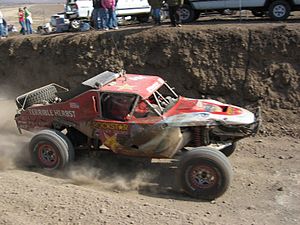 Desert off-road racing began in the 1960s in Baja California and expanded over the next 30 years to include dozens of races and several sanctioning organizations. These organizations created a class structure so that while many types of vehicles could race, direct competition could be segmented into groups of similar vehicles. These classes evolved over time, and included classes for near-stock vehicles, as well as "open" classes that permitted unique custom-built vehicles.

The Terrible Herbst Truggy was given the name "El Tiburon" and "The Landshark", in part due to the paint scheme originally applied to the all-fiberglass custom body of the vehicle. It dominated class one for many years after its introduction, winning back-to-back SCORE Class 1 titles in 1997 and 1998, as well as the overall (all classes) points championship in 1998. It continued to be the most dominant vehicle in the sport for nearly a decade, winning first and second place repeatedly in both class and overall categories in both the SCORE and the BITD series.