Villars-sur-Ollon, commonly referred to as Villars, is a village in Switzerland in the canton of Vaud, part of the municipality of Ollon. 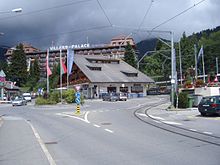 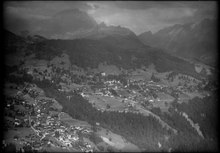 Villars overlooks the Rhône valley from an altitude of 1,258 metres (4,130 ft). The peak of Mont Blanc is clearly visible from parts of the village and from the village's more elevated ski area Bretaye (1,806 metres (5,930 ft)). That area is the center of the skiing network. It is accessible by the BVB railway (Chemin de fer Bex-Villars-Bretaye), featuring a cogwheel train, and by a gondola lift to the 'Roc d'Orsay' (1,952 metres (6,400 ft)). There are around 112 kilometres (70 mi) of skiing slopes in the skiing network of Villars with Gryon, Les Diablerets, and Glacier 3000.[1] The slopes on Glacier 3000 offer year round skiing. Furthermore, the ticketing system of Villars is part of the Magic Pass skiing area that covers 30 resorts in the larger area.[2] 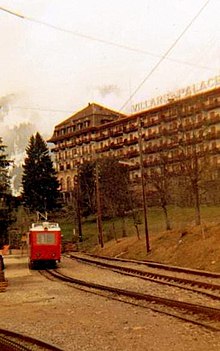 The funicular railway at Villars in 1965

During the 12th and 13th centuries, a notable demographic upsurge motivated the monks from the Abbey of Saint-Maurice to assist the local peasants in conquering and clearing mountain pastures. Tourism in Villars started in 1856 when the first summer only hotel 'Chalet de Villars' was opened by a colonel who had owned a chalet since 1830.[3] In 1901 the railway reached Villars.[3] In 1913 it was continued by a mountain cog-train to Bretaye where the development stopped because of the war.[3] In 1936, the first ski lift was built at the ‘Combe’ on the Chaux Ronde. This was a first in Switzerland, and skiers had to fasten themselves on with a large leather belt in order to go back up the mountain. In 1938, Villars was classified as one of the prime skiing resorts of Europe.

On 13 December 1936, the Orient Express made a special stop in Aigle for a slalom race that took place at Bretaye. That same year a ski lift was built in the form of a sledge. This lift could transport 12 skiers to the peak of the Grand Chamossaire and was in use until 1953. During the fifties and early sixties, the Ollon-Villars Hillclimb was a round in the European Hill Climb championship and attracted racing drivers from all over the world. They would race 8 kilometres (5.0 mi) of mountain road from Ollon up to Villars. In recent years a revival of the hillclimb has begun to attract race car collectors and racing enthusiasts.

Villars is known to host some of the most expensive private international boarding schools in the world, the industry having started in the early post-WWII years. Four such schools remains nowadays: the Collège Alpin International Beau Soleil,[4] Aiglon College,[5] La Garenne School, and Préfleuri.

Many people visit Villars for skiing during the winter months.

The Villars Sports Centre has 5 outdoor tennis courts and three indoor with an indoor sports hall for volleyball, badminton, and football. The facility also houses indoor and outdoor swimming pools, a wellness and spa area, a bowling and billiard lounge, a pumptrack skatepark, and an all season ice skating arena. There are spas and wellness centres in and around Villars, including Lavey-les-Bains, the hottest thermal water baths in Switzerland.

For excursions, the attractive lakeside towns of Montreux, Évian, and Vevey are all close by and boat trips around Lac Leman are easily available. The imposing Aigle Castle built in the 12th century now houses the local Wine Museum. Chillon Castle, built in the 13th century on the banks of Lake Geneva, used to serve as a residence for the noble counts during the middle ages. The Gruyère-Pays d'Enhaut National park is also nearby.