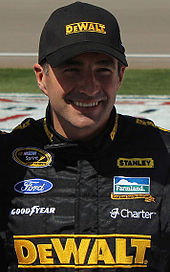 The 2003 V8 Supercar Championship Series was a motor racing series for V8 Supercars. The series, which was the fifth V8 Supercar Championship Series, began on 22 March 2003 in Adelaide and ended on 30 November at Eastern Creek Raceway after 13 rounds. It ended with the awarding of the 44th Australian Touring Car Championship title by the Confederation of Australian Motor Sport to Tasmanian driver Marcos Ambrose. It was the first time a Stone Brothers Racing driver had won the championship and marked the first title win by a Ford driver since Glenn Seton in 1997, ending a five-year run by Holden Racing Team drivers.

The following drivers and teams competed in the 2003 V8 Supercar Championship Series. The series consisted of eleven rounds of sprint racing and two rounds (the Sandown 500 and the Bathurst 1000) of endurance racing with each car piloted by two drivers.

Drivers were required to drop the points earned at their worst round from their total, regardless of how many rounds were entered. Drivers who only entered one round lost all their points.